BRIG GEN KAWUGANA: FAKE NEWS IS A MAJOR SOURCE OF INSECURITY IN NIGERIA, MEDIA SHOULD SENSITIZE NIGERIANS TO BE PRODUCTIVE CITIZENS ®™✓ INN Nigeria © 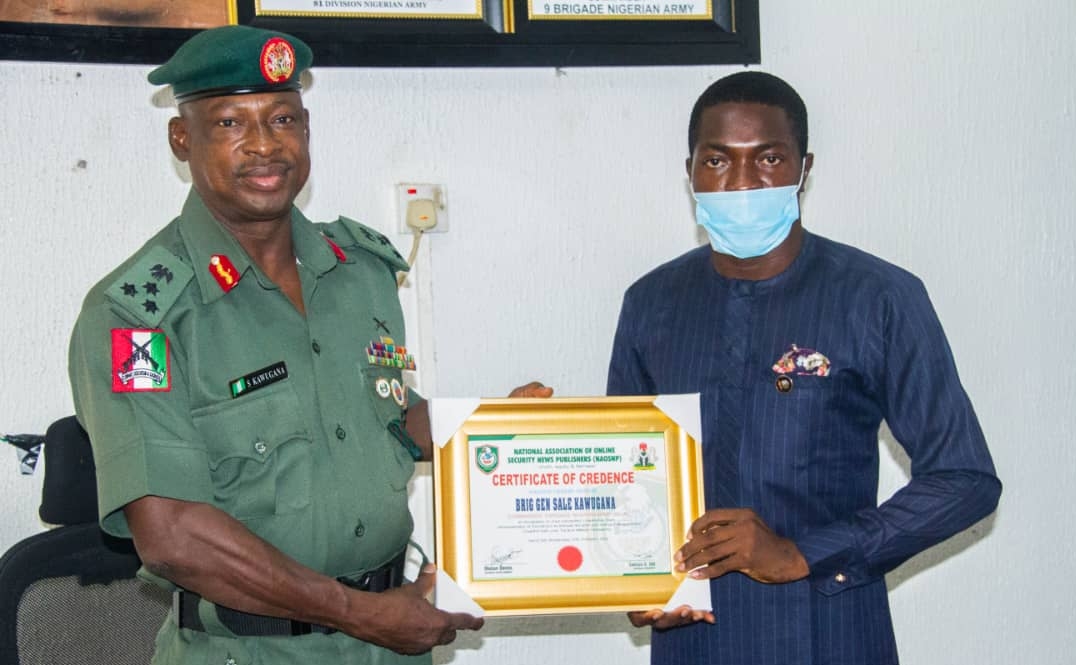 The Commander, 9 Brigade Nigerian Army, Ikeja Cantonment, Brigadier General Sale Kawugana has said that fake news is the major source of insecurity in the country and the government is the major victim.

Gen. Kawugana stated this on Wednesday during a courtesy visit by the National Association of Online Security News Publishers (NAOSNP) led by its President, Mr. Samson Oki and other Executive members.

He expressed joy and satisfaction with the visit especially at a time the country is going through enormous security hiatus coupled with the need to give balanced reportage of events as it happened without biase or sentiment.

The Commander noted that as an Army, they are always ready to discharge its responsibilities adding that there are some people with different mindset whose motives are inimical to the peace and progress of the country.

“I am excited to receive you today and most importantly, your visit is timely due to the security situation of the country. As the fourth estate of the realm, I want to solicit for more supports in covering so many areas especially regulating the relationship between journalists and the society; giving clear and unbiased reportage and setting agenda for the society.

“I appreciate your support and solicits for more from you ranging from rededicating yourself to sensitizing Nigerians to be productive with a view to giving positive reorientation that would make responsible citizens.

“As journalists, I urge you to help in exposing illegal online outlets that generate and spread fake news,” he emphasized.

Appreciating the contribution of the media to nation building, Brig Gen Kawugana promised to “build robust as well as sustain Civil-Military relationships; work with the grassroots as intelligence comes from the society.

“One of my cardinal agenda is to release hotlines for people to call and report what’s happening in their domain and the army would investigate and take action accordingly. Nigerian Army has proven to be the pride of the nation, because government comes and go, but the Army remains the government of the people.

“Where there are negative things, check on us for clarification. We would be responsible partners in progress. At this point, collaboration is not optional but a necessity. Nigerian Army and the press must work together for the benefit of our country,” Brig Gen Kawugana emphasized.

On his part, the President of the National Association of Online Security News Publishers (NAOSNP), Mr Samson Oki observed that as security news publishers, there is the need to collaborate with the brigade considering its strategic position at managing security architecture in Lagos State.

He observed that as reputable online publishers, emphasis is placed on standards, balanced and credible reportage of events as it happens rather than engaging in sensationalism or cooked up stories that are not factual or without sources.

“We assure you that we would always do comprehensive reports of your activities and other military activities. We are conscious of balanced reports hence we seek for your mutual cooperation to have access to confirm developing stories. We are grateful for the kind of cooperation our members have had from the Assistant Director, Army Public Relations, Major Kolawole Bello.

Oki, however, cautioned the youths to respect constituted authorities considering that what played out during the #EndSARS protest that was hijacked by hoodlums and inflicted the state and other parts of the country with huge destruction of both private and government properties was an unfortunate development in our history as a nation.

Similarly, NAOSNP President used the opportunity to call on his colleagues in the media to shun and refrain from sensational stories that could heat up the polity especially at this time Nigerian military is battling with terrorist sects, bandits, Kidnappers and other Organised Crimes.

While commending the Nigerian Army for dismantling, overwhelming the terrorists despite their ferociousiness, a member of the Advisory Board of NAOSNP, Okosun Dennis emphasized the need to support the Army vigorously to conquer every enemy that has stood against the peace of the nation.

Reiterating that there has never been a time in history apart from the years of Nigerian Civil War that the Nigerian Army was stressed beyond its elasticity, adding that the dexterity and commitments of officers and men, collectively has galvanised to the enduring peace we are still enjoying as a people.