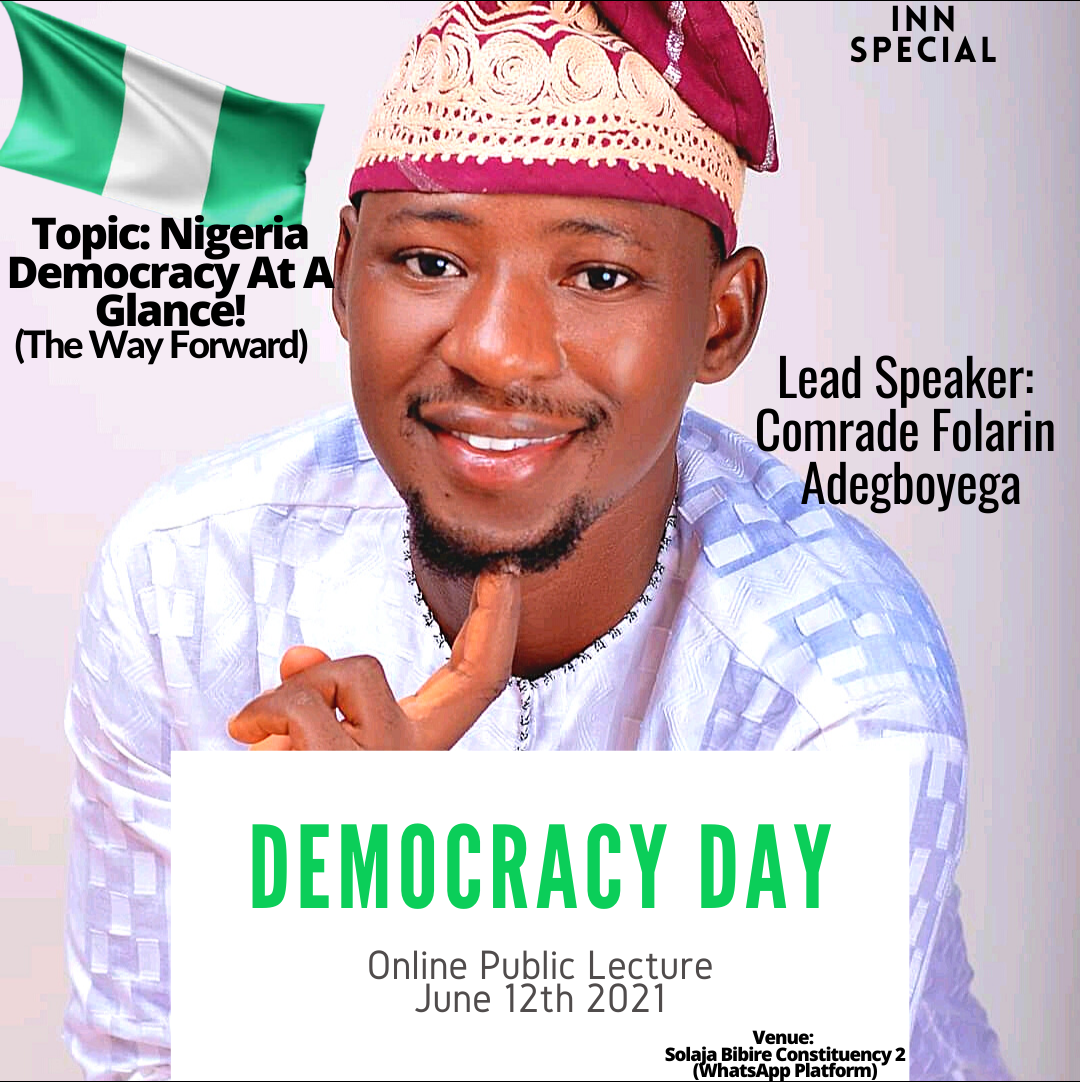 As Nigerians across board marked June 12th 2021 Democracy Day, The celebration was demonstrated and projected in different forms and stance as noted all through the federal republic of Nigeria, due to everyone’s perception of governance, economy, security and stability.

While there were noted protests in some parts of Lagos State, Ikorodu division was relatively calm as residents stayed indoors to mark the milestone era of the Nation.

Such calmness precipitated leaders with ideas to set up engaging platforms for orientation and adequate intellectual empowerment to strengthen the knowledge base of the younger generation and fortify their learning as Nigeria thirst for better leadership.

Such engagement was displayed at the WhatsApp group platform of Hon Solaja Bibire in Constituency 2 by aspiring leaders for 2 hours to enlighten members on the true essence of democracy.

The online Public lecture was captioned ‘Nigeria Democracy At A Glance, The Way Forward‘, which was presided over by Imota’s own Comrade Folarin Adegboyega Awal.

Below are excerpts from the session as regards briefs on the subject matter and also the Q&A segment of the lecture thereafter.

“Now my question:
Is it that we don’t know how to pray or God has not answered our prayer for the past 22 years of Independence?“

“Because;
Is our leaders always right?
Did the youth know the truth or not, if yes is it affecting our Nation positively if not why is the truth far away from our youth?
Is our Nation growing in love and honesty?
Does Peace reign in this Nation?
Does right judgement prevail?
Is this Country growing, moving forward or backward, is there any hope of Success for the less privilege in our Nation?“

“All this ran into my mind when I woke up today to see the word “DEMOCRACY”
But nevertheless I can’t eat my cake and at the same time have it, all this questions needs an answer” Modupe Apata Added

I’m happy to be here this evening as the lead speaker on the topic; “Nigeria Democracy at a glance; the way forward.”

The word ‘Democracy’ had been severally defined by several scholars and school of thoughts and I wouldn’t want to downplay the intelligence and sagacity of the great ones here present. What is the meaning of Democracy?

Abraham Lincoln, the sixteenth president of the USA, gave the populous definition of Democracy.

He said and I quote, “Democracy is the government of the people for the people and by the people.

It is synergy between the elected or appointed or selected representative and the governed where each and everyone has a role to play. The elected being transparently accountable while designing and executing agreed policies, plans and programmes while the governed perform their civic duties and responsibilities. Democracy presupposes to say government officials cannot eat until the people have eaten and Government officials cannot live in comfort when the people are in misery, because the government is for the people. A people-centred government, that’s what Democracy is all about.

However, in the Nigerian context, since 1999, when the military government handed power over to the civilian government which gave birth to the fourth republic and the current uninterrupted Democracy we are enjoying today. Some scholars argued that it is the longest democratic period in Nigeria political history.

It is important to note that these 22years of the democratic system that we are celebrating today has done more good than bad to us because it had engineered necessary democratic value into our political system.

This is not to say that Democracy in Nigeria does not have its inherent challenges.

Note: Nigeria Democracy is still evolving and still at the developmental stage.

Modupe Apata (Facilitators Question1): How do we relate Socialism with Democracy?

Comrade Folarin Adegboyega: The relationship between these two forms of government is that they both centred on people which gave birth to the concept of social democracy. Socialism is a system where the means of production is owned and controlled by the community and democracy is a form of government centred on the people.

Modupe Apata (Facilitators Question2): So what have we benefits from Democracy?

Comrade Folarin Adegboyega: Like I’ve rightly said, democracy has done more good than bad to us. For example, the Obasanjo administration introduces the reduction in the popular GSM and the tariff on telecommunications that we’re enjoying to date. Also, during the late Umar Musa Yar’dua administration, there was a reduction in fuel price among another achievement.

Modupe Apata (Facilitators Question3): Having understood what Democracy is and that our government officials supposed to give us the best, Is this happening?

Comrade Folarin Adegboyega: It is a known fact that our expectations from all our elected government officials are always very high and it is saddening that the result gotten in most cases is low.

Modupe Apata (Facilitators Question4): What can Government do to balance Democracy and Rights?

Comrade Folarin Adegboyega: Democracy and Civil right always work hand in hand. A civil right is an essential component of democracy. It guarantees equal social opportunities and protection for the people under the law, regardless of race, religion, or other characteristics. For examples, the rights to vote, for a fair trial, to government services, to public education, etc are always enjoyed in a democratic setting.

Comrade Folarin Adegboyega: Part of the underpinning of democracy is freedom of information which allow the usage of the internet and social media as a medium or channel for people to express their thoughts and opinions in society. Also, the government on the other hand used the internet and social media to inform the masses about certain issues/problems. They used the platform to propagate their policies and programmes, etc.

Comrade Folarin Adegbogega: Sovereignty resides and flows in the people of a country. The roles and responsibilities of the people in a democratic society are enormous. Part of it is to vote during elections and participating in the democratic process.

Ohi Obadan (Follow Up Question): After participating in the Democratic process by surrendering their mandate to representatives to make plans, programmes and policies, what should then be their duties and responsibilities going forward?

Comrade Folarin Adegboyega: The duties and responsibilities of the government on the other hand is to make good policy, programme and project that will enhance growth and development of the society at large

Modupe Apata (Facilitators Question6): So, what are the way forward for a better Democracy?

Comrade Folarin Adegboyega: The way forward is restructuring! The need to restructure Nigeria can be best described as a child of necessity. Re-structuring is therefore a continuous, inevitable process in the lives of people and nations. Within the context of global changes, Nigeria cannot but continuously adjust itself if it is to survive and thrive as a federation.

Restructuring can take many forms, and it is implemented on different fronts – economic, political, administrative, and even social – in either chosen form. Nations restructure their political system as Nigeria did from the parliamentary to the presidential system of government; and administrative restructuring from protectorates to many states.

For example, the northern part of Nigeria, endowed with vast agricultural land, a huge variety of proven solid mineral reserves, hydropower sources, and a large pool of labour, has everything to gain and nothing to lose from a motivated comprehensive restructuring of Nigeria.

The second part of the way forward is that for us to develop our country, Nigeria, there is a need to amend the 1999 Nigeria’s Constitution to devolve powers, duties, and responsibilities to states and local governments to entrench true Federalism and the Federal spirit.

Comrade Folarin Adegboyega (Closing Remark): As we celebrate our Democracy Day today, we need to remind ourselves that if Nigeria would be united, peaceful, prosperous and to actualise its manifest destiny as the leading Black nation, there is no viable alternative to it than comprehensive restructuring along the lines of a proper federation.