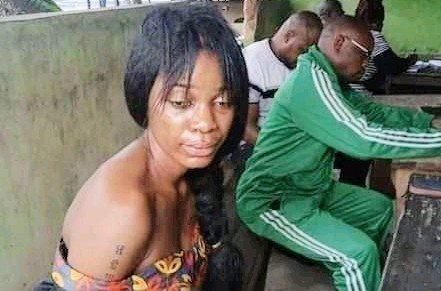 According to eyewitnesses the lady in the picture visited the deceased in Uyo (Akwa-Ibom state), butchered him to death after they had sex and made away with his brand new Mercedes Benz 4matic including the original documents.

The victim, Simply known as Chukwuemeka, is the only son of his parents and was an importer. All efforts to reach him by his friends for clearance of his expected consignments failed (which eventually propelled the need to search for him).

He was later found in the pool of blood inside his bedroom apartment.

Using the vehicle tracker, the girl was traced to a nearby hotel. Currently, she is at Ewet Housing Police Station where further investigations are been ascertained n by law enforcement agencies.