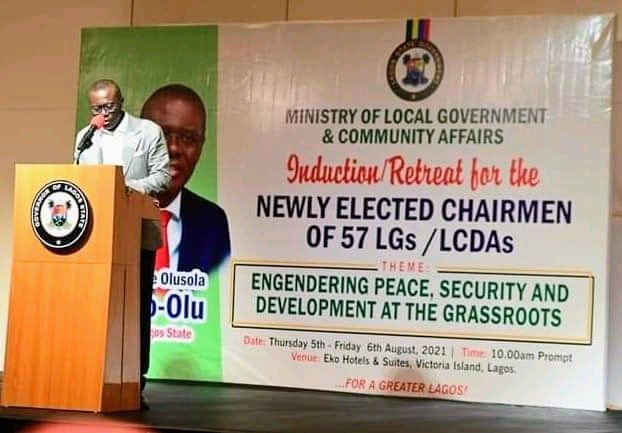 Lagos State Governor, Mr Babajide Sanwo-Olu has urged the chairmen of the 57 Local Government Areas and Local Council Development Areas (LCDAs) in the state to devote their resources to people-oriented programmes that will address poverty and accelerate good governance at the grassroots.

The Governor spoke at the induction programme for the newly elected Council Chairmen, held at Eko Hotels and Suites, Victoria Island, Lagos.

He reminded the council chairmen that the manifesto of the APC on whose platform they came to power gives priority to programmes
focusing on development and people’s welfare, adding that it was incumbent on them to sustain the support, trust and confidence of the people by promoting purposeful, result-oriented and inclusive governance.

“The party’s people-centred ideas and programmes have, over the years, been implemented meticulously at the Federal level and in Lagos to the admiration and satisfaction of our people, who, in return, have remained consistent and unwavering in their support and loyalty to our party.

“As Local Government Chief Executives, you have important responsibilities as Security Officers in your domains, serving as an early-warning security system for law enforcement and security agencies, and for the State Government,” Sanwo-Olu said.

He added that Council Chairmen must have eyes and ears to the ground, working closely with local and traditional institutions, market, transport and artisan unions, youth groups, and religious organisations to defuse those seemingly minor tensions that have the tendency to blow up into unmanageable situations.

The Governor also used the occasion to give a progress report on the 377 projects kicked off last year by the State Government across the
wards.