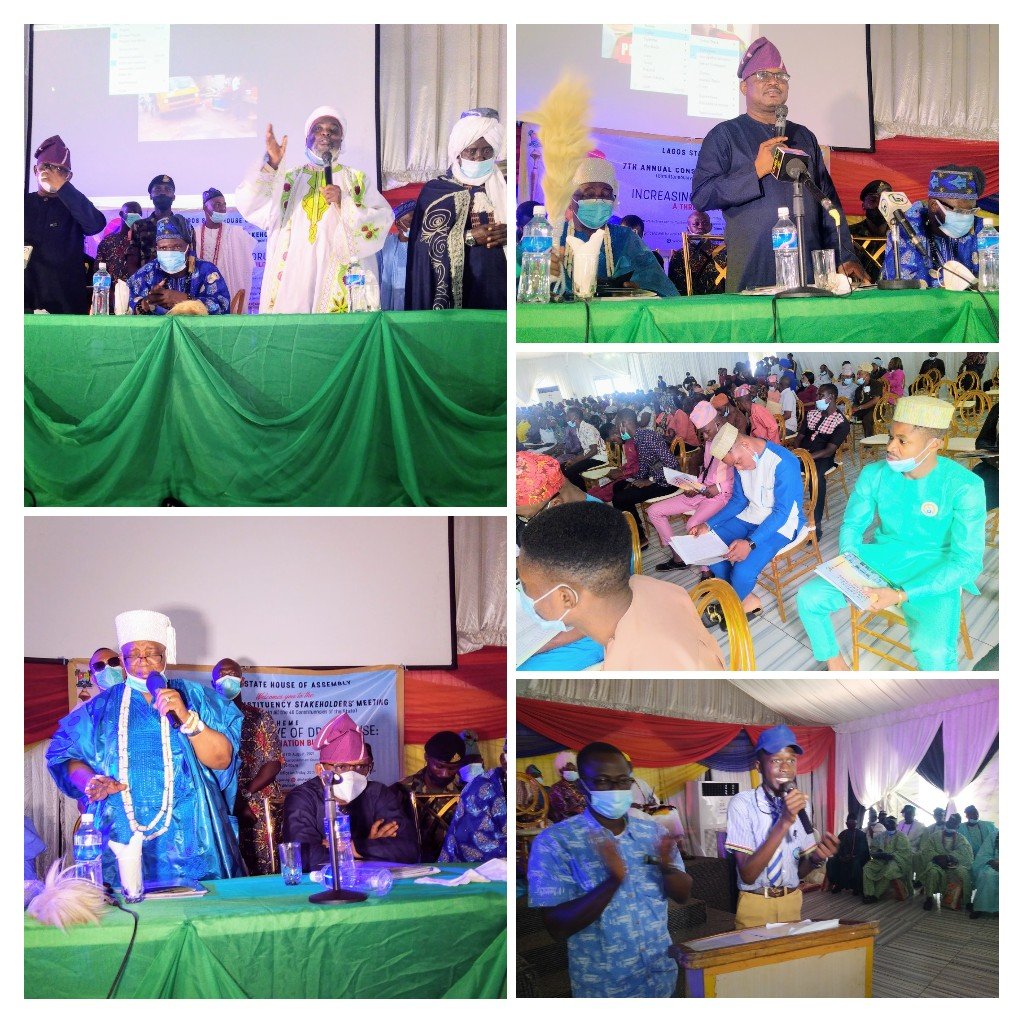 The annual stakeholders meeting in Ikorodu constituency 1 took place at the Quilux event centre on the 19th of August 2021.

Themed, Increasing wave of drug abuse: A threat to nation building, the meeting was laser focused on the after effects of abusing drugs which jeopardizes the career pathway of any positive minded individual.

In his remarks on the case study, Hon SOB Agunbiade Stated, “The theme for this year’s edition is the “Increasing Wave of Drug Abuse: A Threat to Nation Building” and is aimed at sensitising residents; parents, teachers, students, religious organisations, professional bodies, academia, civil society organisations, community leaders, and individuals on the disturbing trend of drug abuse in our society and the danger it portends for the youth and our collective existence”

“The matter had long been a source of grave concern to the Leadership and Members of the House for which the House had exhaustively debated and passed various resolutions to address same such as “Need to Curb the Sales and Consumption of Hazardous Liquid Substances (Sokudaiye) in the State” in 2019, and another, calling on the State Government to “Embark on Anti-Drug Campaign for all Secondary Schools in Lagos State” in 2020″

“Drug abuse in simple terms is the use of illicit drugs, prescription or over-the-counter drugs for wrong medical purposes, or when it is used in excessive amounts that are harmful to the individual and others. Such drugs or substances include; cannabis and prescription opioids, such as tramadol and codeine, tranquilizers while various dangerous mixtures are being experimented leading to novel psychotropic substances such as ‘Monkey Tail, ‘Skoochies, ‘Revlon.,’Colorado’, ‘Sinol, ‘SK’, ‘542’, ‘Loud’, Rush’,’Paw-paw A, Banku’, amongst others”

“The use and abuse of drugs is fast becoming prevalent amongst adults and especially the youths. Drug abuse has been identified to have diverse and devastating effects on the safety and progress of the society. Apart from its negative social effects such as violent crimes, disruption of the family, child abuse and neglect, as well as unemployment, it has been associated with some other criminal
behaviours such as gang formations, cultism, armed robbery, rape and other social disturbances. There are also the economic and health effects such as loss of job, dropping out of school, stealing, and complicated health issues such as persistent nausea, changes in appetite and weight loss, liver damage, seizures, stroke, mental confusion, memory loss and brain damage, and lung disease. All these have far-reaching consequences on both government spending and public safety”

“Besides, more disturbing is the revelation of experts who have established the nexus between the menace of drug abuse and rising
incidences of violent crimes in the country Such as kidnapping and banditry. This worrying development was recently corroborated by the Chairman of the Nigeria Drug Law enforcement Agency (NDLEA), Brig. Gen. Buba Marwa (Rtd.) stated that Nigeria was not only the highest user

of cannabis worldwide but that revelations from kidnapped victims had confirmed the facts that the use of illicit substances were enablers of insecurity currently plaguing the country. He said: “Banditry, insurgency, kidnapping and other criminal activities all have their root in the use of hard substances. Until we face the menace squarely, the problem of insecurity will continue to remain with us.”

“From this revelation, it is not far fetched to draw a similar conclusion between drug abuse and the vicious attack and wanton destruction of lives and properties by some people during the #EndSARS protest across the country in 2020 that left many properties worth billions of Naira in ruins, particularly in Lagos State. We have also heard about the menace of some youths in some parts of the State terrorising their communities. According to a drug use survey in Nigeria by the United Nations Office on Drugs and Crime in 2018, Lagos and Oyo States had the highest prevalence of drug abuse amongst youths in the Southwestern part of the country. These statistics are alarming and are red flags about the need to safeguard our State by safeguarding the future of the young generation. The report stated: “While the use of drugs is observed among all age groups in Nigeria, Overall past-year use of most drug types is high among young people Within the age brackets of 25 and 39 years”

“At the juncture, it is highly instructive to note that the true measure of any progressive society, state, or nation is not merely by its success in the provision of social and infrastructural facilities or its economic achievements, but by the “average achievement in the key dimensions of human development, a long and healthy life, being knowledgeable and having a decent standard of living”. So it must be understood that when we talk about nation-building, it is not merely about the establishment of beautiful structures and recreational facilities but the process of engaging all residents, especially the youth in the development of the nation by ensuring the safety and sanity of all; by nurturing, building and protecting the younger generation who would not destroy but protect our legacy and lead us to the next generation.

“The government at various levels has been making efforts in addressing some of the problems associated with drug abuse and its danger to the nation’s youth. At the Lagos State House of Assembly, the Leadership and Members of the House have always taken matters affecting residents and especially the youths very passionately. The House has continued to be proactive in the consideration of viable laws and policies that would enhance youth potentials and development. Some of the recent laws that were passed attests to government efforts on this matter such as the “Law to Amend the Lagos State Sports Commission Law 2015, to Promote Youths and Sports Development in Lagos State and For Connected Purposes. The Law will ensure that youths are provided with great opportunities not only in the area of recreation but where they can nurture, explore and utilise their potentials in sporting activities to become professional sportsmen and women. This would also take the minds of many of them off drug abuse and criminal activities”

“Consequently, We call on all stakeholders, residents, parents, teachers, students, schools, proprietors, religious organisations, celebrities, social media influencers, professional bodies, the academia, civil society organisations, community leaders, and individuals to work in concert with the government for the common good of our society by saying “No To Drug Abuse” and drug trafficking. Let us remember that our youths are our future and we must show more concern about their welfare. They are the hope of the next generation who can build our State and indeed the nation through positive contributions in sports, politics, education, the arts, science and technology, and innovations that solve future problems as future leaders. Without these, there can never be any meaningful sustainable development in the State and the nation”

“Please let me make it clear that our focus on the increasing wave and dangers of drug abuse does not affect your presentation in the areas of infrastructural needs and upgrade. As usual, you are free to state your concerns and assessments based on our last meeting to see which areas still needs to be improved upon” Hon SOB Agunbiade Added

The leader also added that those seeking submit memoranda has till Friday, 20th August, 2021 to do so at his Constituency Office as there will be Desk Officers there to receive and collate them for my attention.

Hon Azeez Jimoh Olosugbo (programme anchor) shifted the deliberation pace As the meeting migrated into a discourse, traditional leaders, youth executives and also students were given the platform to make adequate contributions to curb the challenges of drug abuse and trafficking.

“The issue of drug abuse today is really surprising to know how far we have come, it was never like this before, But I believe if everyone plays their part responsively, it will go a long way to resolve this plight we face today. Disciplines at all sides, Even our schools must take their daily devotions seriously to keep the spirit of the students in check” Oba Kabir Adewale Shotobi (Ayangburen of Ikorodu Kingdom)

“Parents must keep their children occupied with positive activities that will help them shape the future aspiration of their children, most times these abuse occurs due to idleness and bad friends which results in peer pressures” Oriwu Senior Model College Student!

“We have noticed that the lack of sport centres and facilities has also contributed to the idleness which has resulted in youths engaging in drug abuse-related activities, as a youth myself, I believe if the government can provide adequate sport facilities and also promote events to discover talents across Ikorodu division, it will help solve the challenges we face” Comrade Olatunji Asoro Abubakri

“These people suffering from drug abuse should not in anyway be stigmatised, they should be more supported with good orientation and counsel, this will help them adjust to remedy” Comrade Eleku Soyiga

Stakeholders in the latter appreciated the efforts put in place by Hon SOB Agunbiade to help curb different forms of challenges faced in constituency 1, urging the majority leader to stay fervent in his commitment to developing Ikorodu division.

Also notably displayed in the meeting was highlight of executed projects across Ikorodu division, putting the region at the centre stage of growth and development with a positive trajectory. Kindly click on the link below to preview “IKORODU REFLECTS EFFECTIVE GROWTH & DEVELOPMENT IN LIST OF PROJECTS EXECUTED IN THE 40 CONSTITUENCIES OF LAGOS STATE”