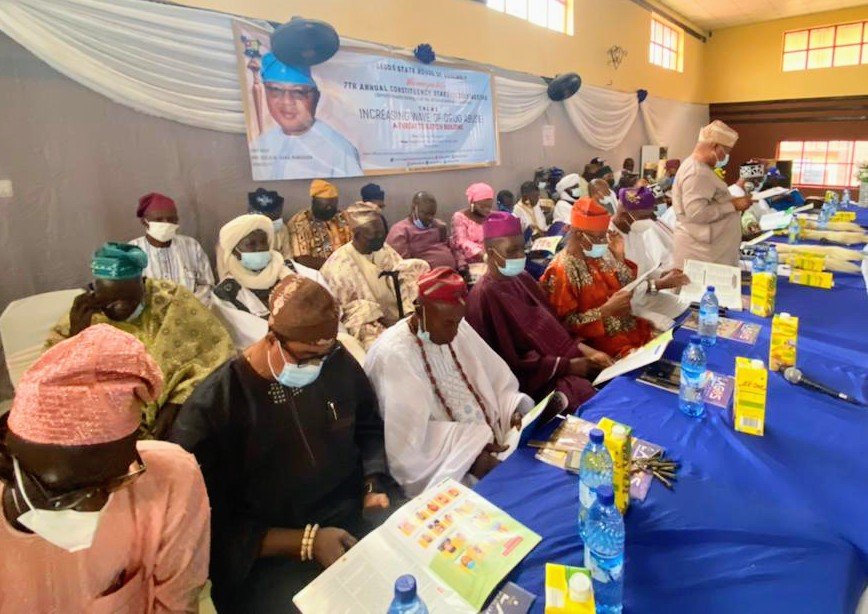 The well attended stakeholders’ meeting was the 7th in the series held simultaneously across the 40 constituencies of Lagos State.
The theme for this year’s edition was “Increasing Waves of Drug Abuse: A Threat To National Building” aimed at sensitising youths, family system, civil society groups on the disturbing trend of drug abuse and the danger it portends for collective existence.

In his detailed presentation, Hon. Saka Solaja described the worrying development as menace with devastating effects on youth
development, safety and progress of the society.

Use of this dangerous mixture such as Monkey tail, Skoochies, Revlon, Colorado, Loud, Banku, others is fast becoming prevalent amongst adults and youths with adverse effects on the society.

As a government we would leave no stone unturned in partnering with various stakeholders to battle this threats through various but impactful youth oriented legislations that will in turn enhance youth
potentials and development” Solaja assured.

Guests, GAC Member from Ikorodu Constituency 2, Asiwaju Olorunfunmi Basorun, newly re-elected Council Chairman of Igbogbo-Baiyeku LCDA, Bldr. Olusesan Daini who spoke at this year’s event challenged the community and the security system to revert to old method of parading criminals of drug abuse, and other vices within the community where such crimes was perpetrated as that according to Basorun will deter others from committing same crime Daini in the same vein advocated sincere synergy in fighting the scourge saying “Drug abuse boosts cultism, rape, armed robbery, thuggery, and other social vices. He however called on all stakeholders to put all hands on deck in nurturing, building, and protecting ‘our legacy’ the youth constituency that would lead the packs of next generation of leaders, we all have a role to guide and protect such legacy”

Also notably displayed in the meeting was highlight of executed projects across Ikorodu division, putting the region at the centre stage of growth and development with a positive trajectory. Kindly click on the link below to preview “IKORODU REFLECTS EFFECTIVE GROWTH & DEVELOPMENT IN LIST OF PROJECTS EXECUTED IN THE 40 CONSTITUENCIES OF LAGOS STATE”