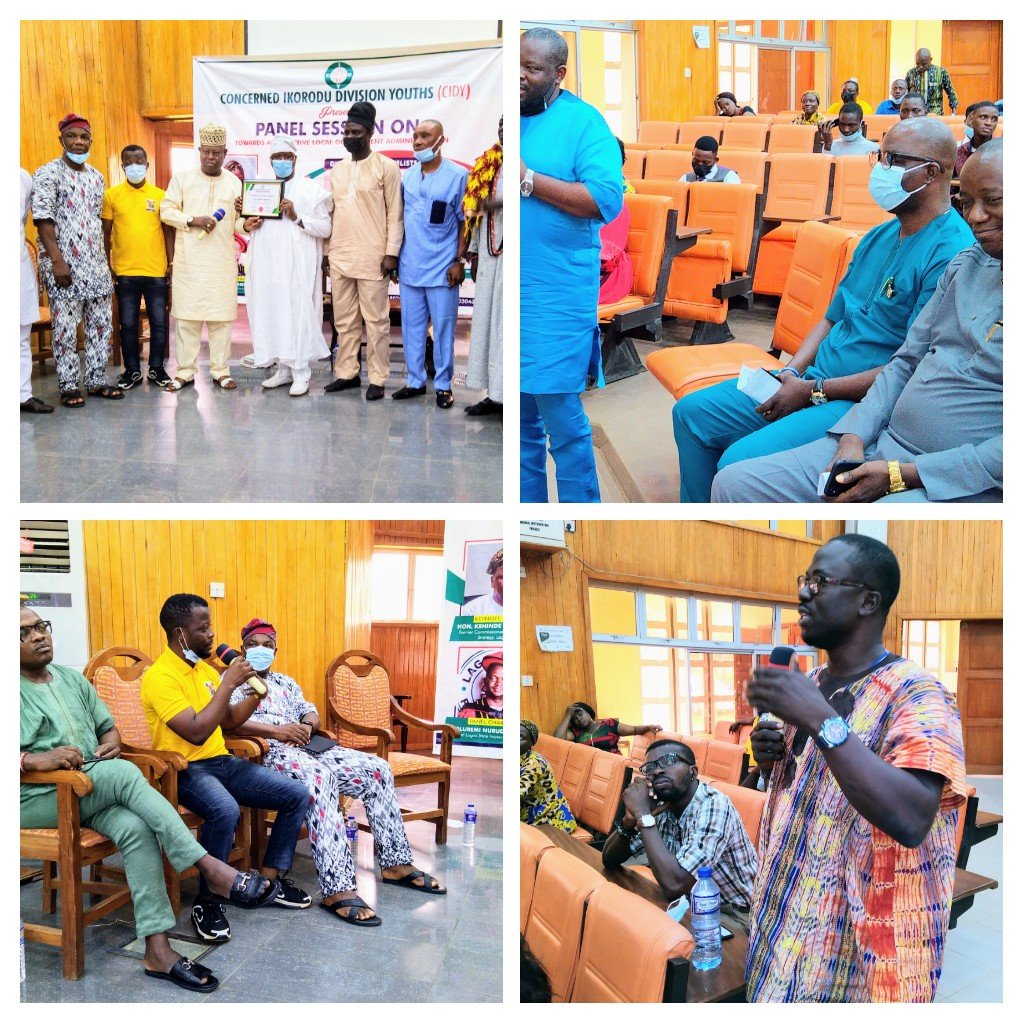 “This question goes to the newly-elected chairmen, vice-chairmen and councillors of the local governments and local council development areas which make up this division. After emerging from very tough primaries, not less than four parties campaigned and made promises to improve the lot of the masses if given the vote”

“The voters are not stupid. They have invested their time, energy and franchise with the cost-benefit analysis that rationally demonstrates that, with the APC at the state and federal levels, the party’s candidates are most likely to deliver the dividends of democracy than the candidates of any other party. This transactional element of the political contract that the exercise of the franchise entails is the foundation of the rising expectations that the voters and even those who stayed away have of our elected representatives”

“The problems that the newly –elected leaders are expected to solve are known by everybody. In the process of developing the master plan for Ikorodu Division, the Lagos State Government held stakeholders’ engagement assemblies in 2019 and 2020. The consensus is a litany of challenges:

“The objective reality is that the material resources required to discharge these responsibilities are, today, severely constrained by deepening economic recession and an unjust governance system that discriminates against the good people of Ikorodu Division”

“The deepening economic recession is the cumulative consequence of the imposition of the Structural Adjustment Programme and the mismanagement of the country’s debt crises to meet the terms of the lenders. The policies of devaluation, privatization, retrenchment, commercialization of social services have led to hyperinflation and a decline in the purchasing power of the government as well as the citizens. In this situation, revenue generation through taxation has become a serious challenge for the government. Industrial and agricultural production is threatened by insecurity. Where will the local governments mobilise the resources to deliver the dividends?”

“The naked injustice of keeping Lagos State, Nigeria’s industrial and financial capital, in the jacket of 20 local governments despite its exposure to regional and national migration and environmental pressure on its infrastructures is most graphic in Ikorodu division. Only one recognised local government, Ikorodu LGA services the 5 LCDA’S”

“This injustice is at three levels. The old Kano State, created at the same time as Lagos State in 1967 now has 70 local governments. This comprises the current 44  and 26 of Jigawa that was carved out of it in 1991. Thus, federal allocation comes to the people of the old Kano State through 70 administrative units while Lagos is denied the opportunity to increase the sources of its federal revenue through local governments to 57”

“The second level of injustice is that the basis of the revenue allocation is meant to be revised at intervals. This would have benefitted Lagos State but this is not the case”

“The third is that certain taxable items such as the Value Added Tax, which, is a sales tax, are residual functions of the state as component units of the federation. Yet, the courts are not persuaded to grant states this constitutional responsibility”

“This implies that there is not enough money in the government’s kitty to solve the critical problems identified by the stakeholders. With few resources for dividends, prudence and frugality become central to financial management in local governments. Cutting waste and blocking leakages are keys to success. Creativity and innovation provide the levers for scaling the hurdles”

“One good advantage the Ikorodu division has is that the Lagos State Government recognises the challenges, and has, through the launch of the Ikorodu Masterplan, shown that it is ready to work hand in hand with you to solve the problems. You need the machinery of your own, and the economic council of Ikorodu Division- to make it happen. It will be the first sign that you are prepared to take your destiny into your hands”

“An Ikorodu Division Economic Council that commissions drawings, designs and feasibility studies of the waterfront, industrial estates, and takes the projections of the master plan to the next level will get the ears of the administration to execute the desired goals”

“The second good news is that the planners of Lagos State have realised that the central areas are built up and that future development will be channelled to Ikorodu, Epe and Badagry. It is left to your leadership to embrace this mindset and make it work for your people”

“The third is the opportunity that the community, both corporate and grassroots, can provide for the mobilization of goodwill and expertise to enhance development. Let the corporates and the CDAs join the economic council and bring to the table the collective communal passion for development that would remove obstacles and volunteer skills to make the economic development of the division possible. The Ikorodu Masterplan targets 20 years, you can start with what is achievable in five years. With frugal culture and creative management, local governments can invest their resources in the welfare of the citizens. Programmes such as free meals and free uniforms promote child enrolment and payment of development levy by parents. Free drugs and basic laboratory services keep more people healthy and boost goodwill. Grants to co-operatives give petty traders and small scale owners in the business. Trust me. They work. I have tried them before”

Speaking on behalf of the LG/LCDA across Ikorodu division during the session, Bldr Sesan Daini gave a transparent facelift to the challenges facing the local government from the grassroots approach, thereafter proposing positive synergies from every sector of the community when needed to project development, rather than adopting unguided criticism.

“Most of the challenges we’re going through today was highlighted on the brief for the session, Now in the Constitution of the federal republic of Nigeria, the duties and responsibilities of the local government is clearly stated, And anyone that wants to criticise the government should first go through that section and understand the local government functions before criticism. Why? Because some of the things we are criticised for is totally out of our responsibilities”

“One of our major challenges today is that people don’t ask questions, a lot of individuals just gaze at the administration for four years waiting for a miracle to happen. For governance to be effective, it must be put on its toes. While we’re always open to critics, it should be a constructive one, We must do things to reduce the questions that would be asked tomorrow”

“If the people keep asking us, we’ll be reminded of our duties and responsibilities to perform more in office. While asking, they should also read our manifestoes, carefully check out our scorecards and peruse what we’re doing to help grow our communities. They should not always hang on the negative and likened their complaints to political smearing”

“Everyone must perform according to their capacity, so also for individuals appraising government performances must do the right research to create credibility and a reputation for accountability“

“Another way to bring an adequate solution to the council’s administration is restructuring the federal allocation sharing formula, which will bring about effective checks and balances at the local government level” Bldr Sesan Daini Added

Former Chairman of the Lagos State local service commission and chairman Ikorodu division resource development group (IDRDG) Alhaji Babatunde Tajudeen Rotinwa in his moderation and intervention speeches made it clear on the need for local government to press for more federal support in moving the LG/LCDA agenda forward positively.

“National bodies should be used to lobby for more leverages on behalf of the local government in areas of the budget. There is a separation of power at the national, state and local governments. The legislature should sit down and look into more means of local
Councillors getting involved in the process. Lagos State is receiving the highest allocation from the federal government and that must be properly utilised”

“More so, Focus should be made on the internally generated revenues too and how best it can be managed to help the communities at large, it is a collective responsibility not individual” Alhaji Babatunde Tajudeen Rotinwa averred

“Should civil servants be cautioned on their management approach consistently? yes! Those at the helms of affairs should be held accountable. But also, those at the mid point and grassroots should be controlled too” Oba Billiamin Lekan (Chairman, National Youth Council Lagos State Chapter (NYCN).

On the other hand, whatever policy is been put in motion will be driven by youths, but if the laws are not youth oriented how can there be improvement in our system” Oba Billiamin Lekan

Hon Azeez Jimoh Olosugbo in his contributions stated there is more the local government can do to integrate their performance with community service for better productivity in Agriculture, Technology and Job creations.

“There are youths that needs I.T placement but don’t get such support from the local government due to reasons that they can not pay them. We are here in LASPOTECH, and there are traffic lights in the school created by electrical engineering students”

“One of the issue in Ikorodu is traffic, I would suggest the local government partner with this school and get more traffic lights across our division” Hon Azeez Jimoh Olosugbo asserted

Kunle Adelabu (Chief-Editor, The Impact Community Newspaper), co-convener of the session stated that the Concerned Ikorodu Division Youth will be setting up an agenda to monitor the work performance of the LG/LCDA thereby enhancing their level of productivity in the next four years.

“This program is meant to assist in bringing effective local government administration in Ikorodu Division, it is positioned to collaborate with the council bosses in setting agenda for their administration in the next four years, it is our way to get them to know the feelings of the people and also knowing what their challenges are and what to do to cater to those challenges”

“This is just the first phase of CIDY’s projections. There will be implementation of communique that would be done in phases. Aspects for local government and state government. If need be we’re going to sponsor private bye-laws at the local level. It is all about engaging the ones at the helms of affair to amplify their contributions to grassroots development”

“We cannot keep saying the local government is not working, this forum is meant to bring them together for us to brain storm and see what we can do to provide solutions to most of our numerous plights” Kunle Adelabu Asserted