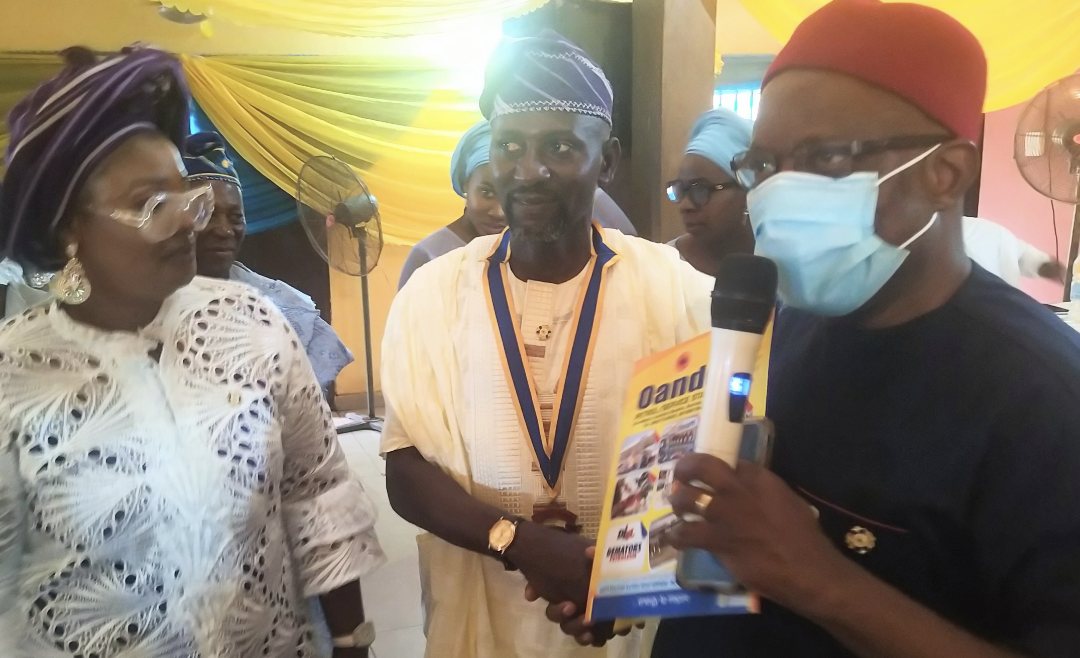 Concord event centre at Sagamu road saw another official change of guard in the leadership of Ikorodu metropolitan lions club on the 9th of October 2021, as lion Babatunde Sunday Shobowale emerged as 18th president of the award-winning charity organisation in Ikorodu.

According to Lion Adefunke Oluranti Esan (Outgoing president) “Our new president Lion Babatunde Shobowale NLCF is an amiable lion, a friend, a brother from another mother who happened to be inducted into the Lions family with me the same day some years ago”

“During my tenure, achievements would not have been made possible if it was not for you my fellow amiable and lovable Lions; 1. Membership Growth: Nine (9) committed members were added to our previous tally as the family continues to grow even more,
Nobody was dropped as we all understood that the best way to continue service was to increase the number of our charitable members. 2. Projects: A couple of productive projects were embarked upon during the last Lions year. July 2020: Sequel to the easing of the lockdown about the COVID-19 pandemic, a total of five hundred (500) alcohol-based sanitizers was distributed by the club at the Ikorodu ferry Terminal”

“The club also distributed customized nose masks at the lkorodu BRT Terminal and Odoguyan Bus Stop. August 2020: The club trained in total over fifty (50) youths com ising of Leo’s from other Lions clubs in Adire (Tye and Dye) making and Makeovers. They were all awarded certificates of participation at the end of the training. October 2020: The Vision Month, the club in partnership with Eye Foundation ljebu-Mushin Ogun State, sensitised, screened and administered treatments to people with certain eye defects or others. The screening took place at Odogunyan Town Hall another massive total of Two Hundred and Thirty-Three (233) people showed up and were all attended to. A total of One Hundred and Twenty (121) were given free eyeglasses, Forty (40) required eye drops: and drugs were given to them the same day while Twenty-Two (22) people were scheduled for cataract removal. December 2020: Feeding the Hungry: Following the aftermath of the End-SARS protest and the COVID-19 lockdown which both undoubtedly left the nation in an economic bizarre”

“The endangered masses who were already threatened by high poverty seemed to
have it the most, in the wake of these events, the club came together to uphold one of its most truest creed “to serve the needy”. Hence, the club reached out to feed over a hundred and twenty (120) individuals at Ogijo, a neighbouring town at Ogun state on Boxing Day. January 2021: Feeding the Hungry part 2: These was held at the Lagos State Rehabilitation Centre Owutu, Agric, Ikorodu, Lagos State. Items ranging from household materials down to food and clothing were also donated”

“Vision 2:The selected few for cataract surgeries were contacted and moved to Eye Foundation at Ogun State all expenses paid by the club. Of the Twenty Two selected only eight (8) had to be inmec Italy operated upon, two (2) got special glasses while the remaining were asked to revisit after the cataract is matured enough for removal. February 2021: Pediatric Cancer Awareness Campaign: The club fully participated in the District-wide awareness campaign”

“The club held a symposium at two (2) different primary health centres. Parafar Primary health centre and Odonla Primary health centre were the two health centres visited by the club, lectures were carried out at both and a brand new water dispensing unit and customised nose masks alongside customised notebooks and nose masks were donated at both respectively. March 2021: The club celebrated International Women’s Day by giving over sixty (60) widows food and gift items and celebrating them as international women, this happened at the Secretariat of the Nigeria Union of Teachers lkorodu Branch. April 2021: The club joined in with other Lion clubs to plant a tree too to aid environmental protection and cleanliness. The club planted several trees at Odonla Primary Health Centre and also donated a giant-sized waste disposal bin”

“The main core project was the resetting, repainting, remodelling of a five (5) block classroom at Lagos State Model Nursery and Primary School, Ikorodu which was commissioned by the District Governor Lion Tokunbo Aromolaran MJF NLCF District Governor 2020-2021 on the last day of the lions year and of my tenure as president.
Indeed we are what we say we are, we are Metropolitans, we serve the needy with passion. The club also won so many awards during its tenure both locally and internationally” Lion Adefunke added

In his acceptance speech, Lion Babatunde Shobowale stated “I accept to serve as the 18th President of lkorodu Metropolitan Lions Club with our member’s unflinching support and encouragement. Over 1.4 million volunteers, serving in various parts of the world, Lions Club International has been in
the frontline of providing relief and succour to so many people around the globe year in, year out”

“We’re are going to focus on 5 LCI global service framework which includes; vision, diabetes, relieving the hungry, pediatric cancer and protecting our environment, Among other vital humanitarian relief activities as need arises in the course of the year, We also planned to set up a Morden Library at Ibelefun Primary School, Owode lbeshe, Ikorodu, Lagos State”

“To my entire members of Ikorodu Metro Lions Club I say NAMASTE for your support since the inception of this Lions year, I promise never to disappoint you” Lion Babatunde Shobowale added

Prior to the installation of Lion Babatunde Shobowale as 18th president of the club by Lion Ano Anyanwu PJMF, NLCF (First vice deputy governor in district 404A1), Lion Adefunke Oluranti Esan presented award of Honour to diligent members of the club while new members were also introduced and sworn in to advance the club’s aim in its new leadership.