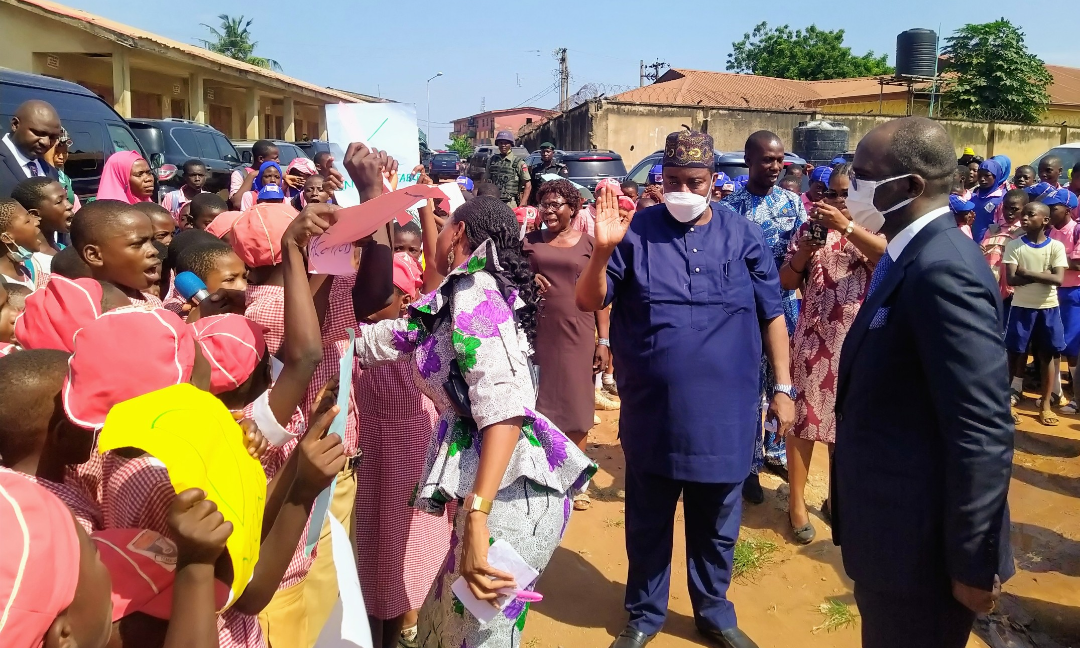 It was high praise, excitement and celebration at borokini axis of Ikorodu as Senator Adetokunbo Abiru commissioned a completed project of 6 blocks of 24 classrooms with well-equipped toilets on the 14th of October 2021, at Aga Primary school in Ikorodu local government.

The education-oriented project which brought tremendous joy to the good people of Ikorodu was handed over to Ikorodu local government for adequate care and enhanced maintenance for purpose of sustainability.

With religious leaders, LGEA reps, councillors, teachers, parents and students present, the distinguished senator (Tokunbo Abiru) warmly received by the chairman of Ikorodu local government (Hon Wasiu Adesina) attributed the project completion to the recommendation made by the council boss.

“I did my primary and secondary school education in public schools before furthering my higher learning at the Lagos state university (Unilag), that means I am mostly a product of public institutions to understand the essence of executing a project of this nature. It got me to where I am today as a force to reckon with both in the public and private sector”

“What we did within the space of 3 weeks is to create a conducive atmosphere for our children to learn and grow academically by building the structures up to standard. They’ll now be happy and excited to wake up in the morning and race to school to learn without any worries. Am also certain that Adesina’s administration with which we’re handing over this project will ensure to keep it maintained” Senator Tokunbo Abiru added

Hon Wasiu Adesina in his remarks of gratitude applauded Senator Tokunbo Abiru for living up to expectations in collaborating with the local government to uplift the grass-root.

“It gladdens my heart to see the commissioning of our primary school at Aga been handed to us by the millennium development goals (MDG) as facilitated by our distinguished Senator Tokunbo Abiru (representing the Lagos East senatorial district at the National Assembly). His performance is highly commendable“

“Many parents initially thought that giving formal education to their children or wards was wastage of time before, especially female children who were majorly discouraged but now they appreciate the values and benefits of their children becoming doctors, engineers, technocrats, lecturers, professors, bankers, accountants etc, which cannot be achieved without being certified through good and standard education”

“My administration has been kind to support the educational sector at the grassroots level with; Donation of new desks and chairs to some public primary schools in Ikorodu, Building of toilet units for the Salvation Army primary school, Ikorodu, Reconstruction of collapsed fence of salvation army primary school, Yearly disbursement of G.C.E forms, Bursary allowance to Ikorodu Indigenes, Donations of notebooks to primary school pupils in Ikorodu, Distribution of school bags to both primary pupils and ‘secondary school student during 2021 spelling bee competition and so on”