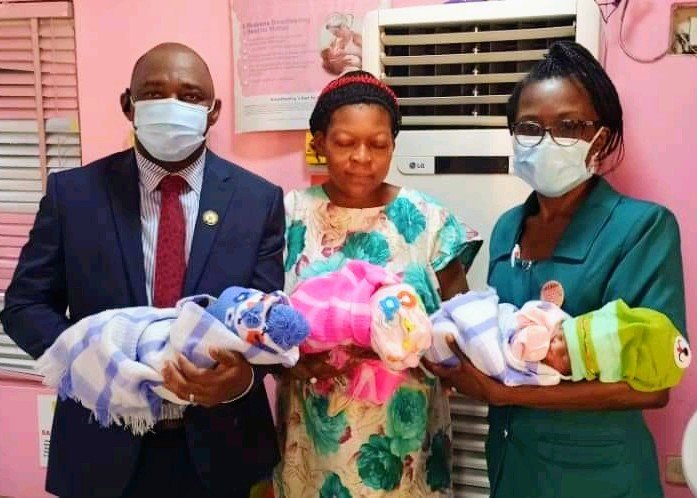 The maternity unit of General Hospital, lkorodu went wild with excitement on the night of Sunday, 31st October 2021. Passers-by and patients within the vicinity wondered what the excitement was all
about; however, it didn’t take long for them to get their curiosity satisfied as the news later broke that a set of triplets had been delivered at the hospital again without complication.

This is the second triplet delivery in the last six weeks! It will be recalled that 35-year-old Mrs Obeta Amaka was also delivered a set of triplets by the same unit on the 12th of September this year. The new mother, Mrs Grace Joseph, aged 21, a booked patient of General Hospital, Ikorodu, was admitted through the emergency ward of the hospital on Sunday night. She later had an emergency Caesarian section on the same night and was delivered of a set of triplets by a team of surgeons and theatre personnel led by Dr. Aderinwale, with the Paediatrics team on the ground to receive the babies.

The first of the triplets, a female weighing 1.9kg was delivered at 9.19 pm. The second, also a female weighing 2.0kg, was delivered at 9.20 pm while the third, a male, came out at 9.21 pm weighing 2.4kg. In an interview with the triplets’ mother, Mrs Grace Joseph, who resides in Ikorodu with her husband, a businessman, she revealed that she knew she was carrying a set of triplets when her pregnancy was about four (4) months. In her words, “Even though it was my first pregnancy, the news of the set of triplets didn’t come to me as a surprise.

I was asked to go for a scan by one of the doctors at the hospital during one of my anti-natal appointments. The results of the two scans revealed that I was going to give birth to a set of triplets. Since then, the hospital had been giving me close monitoring. I also made sure l adhered to all instructions given to me by my the doctors.” Though she had to stop her fashion designing job
temporarily because of the pregnancy, she was happy the decision was worth it. “Am indeed grateful to the doctors, nurses and all other hospital staff; they have been wonderful all through my pre and postnatal periods.”