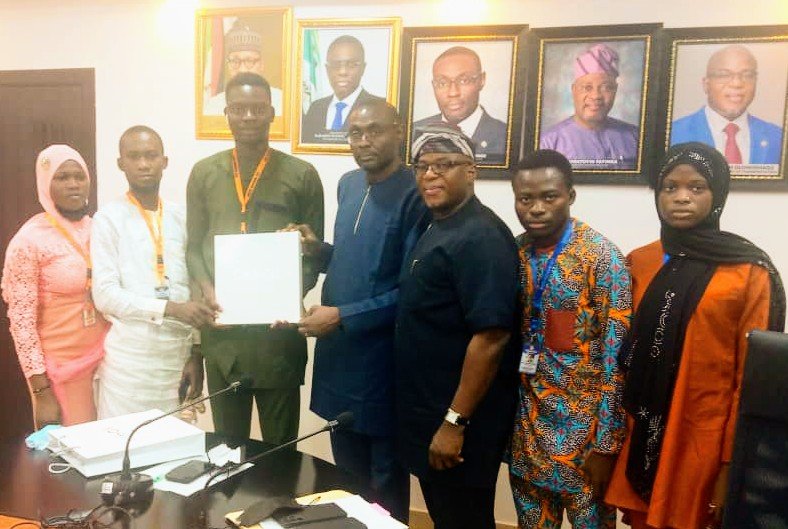 The national Executives appointment with the Commissioner for transportation, Dr Frederic Oladehinde at the state Office ministry of transportation Alausa Ikeja on the 12th November 2021

The discussion commence at precisely 11:30am in attendance is the permanent Secretary to the Commissioner Mr Kamar Olowosago the Ikorodu born Outstanding leader.

The president of the association Comrade, Kuti Damilare Opeyemi submitted the Executives to the Hon Commissioner and fetched forth the agenda, commencing from the challenges confronting the association which comprises familiarisation and most importantly monetary stability and also inform the Commissioner of Our Upcoming program which is the chess and Scrabble rivalry which is Aimed at improving and foster the connection of every Student in Ikorodu Division and Lagos State as an entirety, prompting the Hon Commissioner’s intervention in order to promote the aims and objectives of the association.

Permanent Secretary, Mr Kamar Olowosago in his response inquired if the Association is a registered Association and also sighted an example of the challenges he mugged while he was trying to run such association in 1993.

After a positive response by the executives, he suggested the executive’s yeast well with the Indigenous groups and Association in Ikorodu to re-tap from them sighting example of the progressive IDRDG, and advise the association should relate with them and also familiarise with Kabiyesi (Ayangburen of Ikorodu), the legislative from Ikorodu should not be left out, the likes of Commissioners from Ikorodu, to reduce stress from the association and give room for more progress.

The Hon Commissioner requested for the association’s constitution, Objectives to be submitted Officially for the ministry to open a file and look into the affairs subsequently.

A budget of the association’s upcoming program was subsequently presented and the commissioner pledged his support.