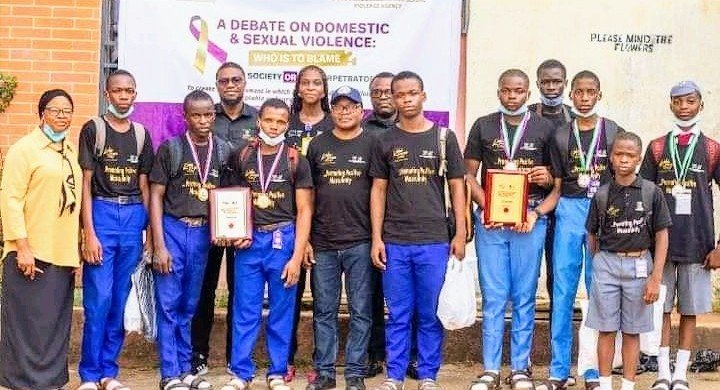 In commemoration of the 16 Days of Activism for the elimination of violence against women and girls, the Lagos State Domestic and Sexual Violence Agency
(DSVA), in collaboration with the Kings Club Project, has organised a debate among male students on domestic and sexual violence at Oregun Junior and Senior High School, Kudirat Abiola Way, Oregun.

In her opening remarks at the event which had in attendance Counsellors, Teachers and Students drawn from Education Districts II, IV, V and Lagos Mainland Primary School, the Executive Secretary of DSVA, Mrs. Titilola Vivour-Adeniyi highlighted the importance of engaging boys as a means of preventing domestic and sexual violence.

She reiterated that the topic of the debate: “Domestic and Sexual Violence: Who is to Blame? The Perpetrator or the Society?” is relevant to current issues in society, pointing out that boys are not immune from experiencing domestic and sexual violence.

While encouraging every victim of domestic and sexual violence to speak out and break the silence, Mrs. Vivour-Adeniyi noted that the ultimate goal of the initiative is to create a sustainable structure in educational institutions that would help debunk sociocultural misconceptions, promote positive masculinity as well as behavioural and attitudinal change in the minds of young boys in Lagos State. She hoped that it would also ultimately reduce the occurrence of Sexual and Gender-Based Violence in society.

The debaters, representing different schools, canvassed their positions and urged members of the public as well as the State Government to ensure that Domestic and Sexual Violence is drastically reduced or eradicated.