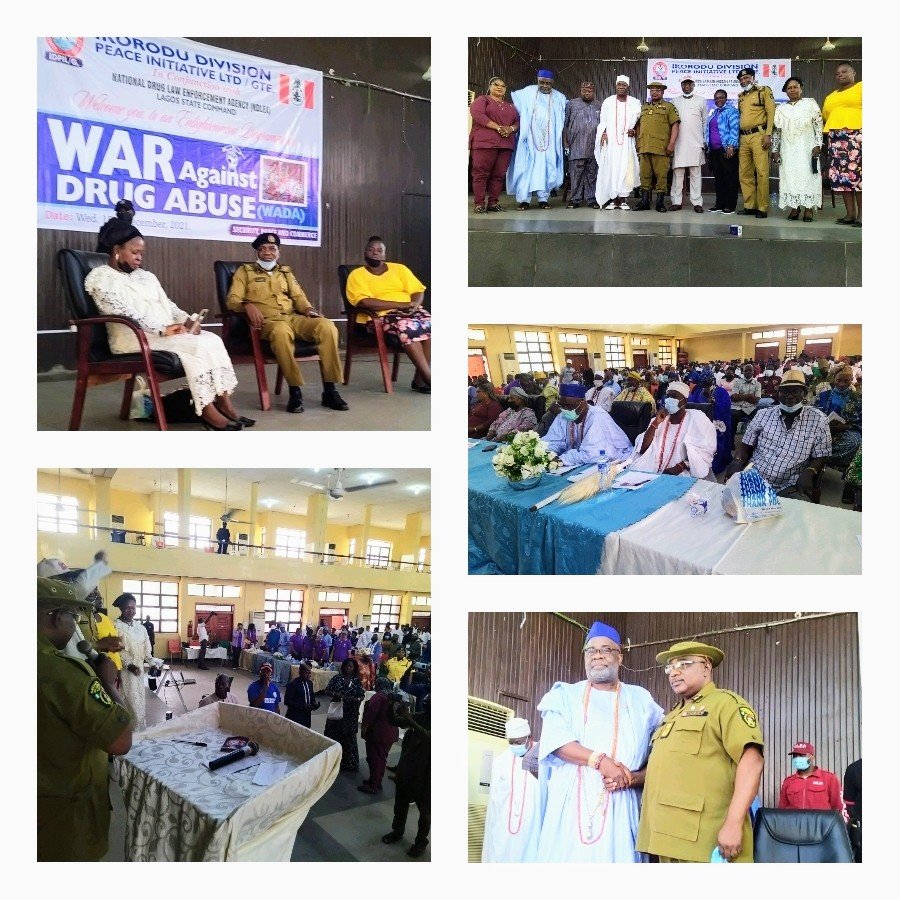 In this era of social media, culminating absolute peer pressure, it is no longer news that one of the challenges downgrading economic development is the abnormal subscription of minor towards illegal substances in the guise of promoting a trendy lifestyle

Oblivious to its deadly after-effects and fallouts, youths subside prey to the infectious obsession, realising the deterioration only when it’s too tardy

With an alarming increased rate of drug abuse among young individuals at a larger scale, Ikorodu division peace initiative (in a bid to proffer a solution) took a monumental step (in partnership with the Nigeria Drug Law Enforcement Agency {NDLEA}) to combat the epidemic with a symposium at Ikorodu ultra-modern town hall on the 15th of December 2021

“We enjoin leaders to embrace sufficient sensitisation due to justifications, we don’t know where our youngsters gets influence over time, Our parents should put up with it as a scolding to keep with their children at all times, evaluating themselves with their basic actions and gatherings”

“Like the saying goes, Idle hands are the devils workshop, engaging the youths in efficient activities will keep them away from unprofitable endeavours like confiding in drug abuse. That’s the essence of this forum in order for Ikorodu division to positively embrace the massive development we’re witnessing today” Hon Adebimpe added

Area Commander, NDLEA Ikorodu Division, Mr Opeloyeru Lawal, Mrs Oluwaranti Edagbagbe and Barrister Adekoya on the path of fighting against drug abuse highlighted dangers of subscribing to illegal drug and it’s consequences (which was carried out in a practical presentation via projector)

In his remarks, Chief Adewunmi Odunsanya (Odofin of Ikorodu) caution residents in Ikorodu to bell ring the present campaign which is the war against drug abuse, adequately procuring the news across for inventive minds to refrain.

“Our children are transmitted away by what they see and not the proficiency they amass, this is why constant perception will keep them abreast of useful decision making to deviate from negative lifestyle (which encompasses the use of illegal drugs)”

Mr Alumona C.O (Area Commander, NDLEA Lagos state) in his closing charge employ leaders (in Ikorodu division) to take the bull by its horn, getting the message to those it pertains to and put a seize to the emergency

“As an agency, we’re poise to stop the inflow of illegal drugs to this state, and with that we’re effectively fighting against the circulation of the substance which is ruining the lives of our young ones”

“We know it’s not a one man’s job, that’s why we invariably notifying people, If you see anything please say it and let us help. Repressing this infectious exercise has sent a lot of inexperienced self to their early and we’re saying today that enough is enough”

“Ikorodu is a treasure in Lagos state for it’s ancient historical background, preserving the culture and heritage means we must work together to prevent negative forces” Mr Alumona Added