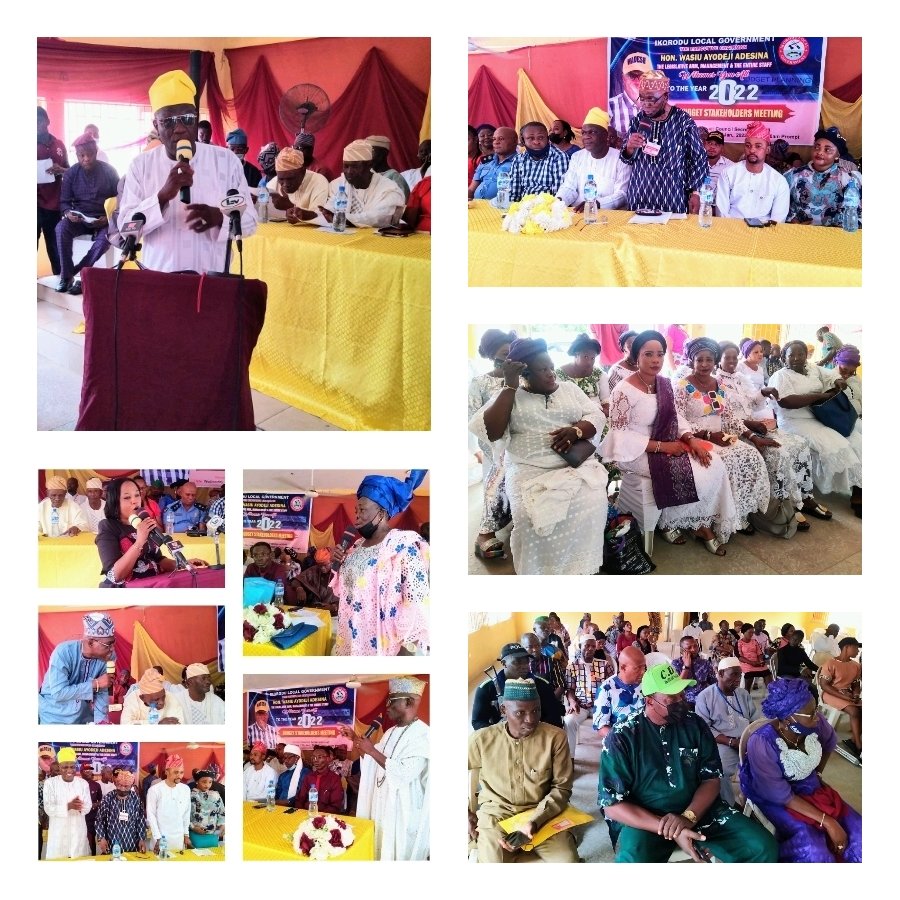 In a budget stakeholders meeting organised by the executive arm of the council, ably anchored by the regime’s head (Hon Wasiu Adesina), stakeholders from across the central fraction of Ikorodu coalesced to ponder on areas the authority must prioritise to aid compatible grassroots improvement

Playing host to Leader of the House, Councillors, Council-Manager, Heads of Department and Unit, APC Party Stalwarts/Chieftains, Royal and Religious personalities, Market Leaders, Transport and Youth Leaders, Captain of Industries etc the program packed the hall to its perimeter

With representatives from the community development association/committees, Baales and artisans in all wards fully on the saddle, the council chairman in his preliminary address (which was also graced by the former deputy governor of Lagos State, Prince Abiodun Ogunleye) aimed the meeting to deliver opportunities for community leaders and practitioners to propose ideal models for further allotment of budget which is meant to consolidate revenue, thereby stimulating the societal enlargement

Adesina recounted, “This year’s Stakeholders forum has been carefully packaged to accommodate all the inputs, several requests and opinions of our beloved Stakeholders, in consideration of the Council’s Annual Financial Budget year 2022”

“Moreso, this forum will highlight positive methods of Harmonising a cordial relationship between the Ikorodu Local Government Management and her Stakeholders”

“In the same vein, even though we had financial limitations, coupled with the harsh Economic Instability faced by this administration, with the help of God we’re delivering most of our promised mandates to the good people of Ikorodu local government”

Highlighting his numerous feats, the council boss further breached his speech to clear the air on the unusual stalling of the sabo cemetery maintenance project

“During the course of our proceedings, I was approached by Arab contractors in charge of the sagamu road project, they brought to my notice that their work schematics might affect the fencing of the sabo cemetery”

“On ascertaining their findings I was later informed that if such occurred the local government would be responsible for raising the fence back, which I declined”

“That’s the reason why the cemetery maintenance project has been halted, though we’re presently toiling towards a dialogue, once attained, the project will be completed as planned” Hon Wasiu Adesina expressed

At the concern and clue session, mostly receiving credits for a maximum of the operation already accomplished, some stakeholders advised the administration to digitise education, while others persuaded the oversight to place more attention on poor waste management and drainage systems across the neighbourhoods

“It is reasonable for us to retain good proposals, but if not fast-tracked, it will certainly implicate grassroots development. Developmental policies and missions will only see the light of day if efforts are fast-tracked and not stalled”

“I need to also oblige the local government to make councillors available to the people. As a CDA we’re playing roles that the local government should be a part of. Most CDAs are driving through difficulties due to impoverished waste disposal management and the council has to look into it too” Tunde Adelahun

“The administration should accept digitised learning, to be hosted in the local government secretariat temporarily to enhance education across the wards”

“We’re in the age where hastily enough writing on the board will be a thing of the past, technology has remade everything, so am imploring the chairman through his pedagogy wing to lay digital proficiency into consideration” Pst Mrs Oyeyemi

Alleviating the scepticism raised by attending guests and representatives, the chairman continued, “We amass this conference for stakeholders to prepare their community proposals and illustrate them to the local council for synergy with our budget preparation due to motives we’re in this together. We have taken note of the points and suggestions accentuated”

“About our focus as a council, we have noticed most of our primary schools contain old structures, these schools with terrible patterns will be injected into our budget for renovation”

“The local government is also pressing towards obtaining ownership of Ita Elewa open space, which we plan to fence around and utilise in a configuration of a youth recreational centre”

“In addition, we’re completing the arowolo drainage work this year including the agura gberigbe road while waiting for the state to take over that undertaking”

“With a major strategy to work on Kokoro Abu axis, our eye stands fixed at Solomade street and Mowonla path for motorists to feel at ease making use of those routes.

“On health, we intend to Improve Agura primary health centre, and permit me to add, all our councillors in Ikorodu local government are very much accessible as we can notice they’re all present exemplifying their various wards”

“Our CDA leadership has expressed their gratitude to us for giving them automobiles, our Kings and baales should be expecting car gifts also from the local government” Wasiu Adesina expanded, simultaneously appreciating everyone for gracing the progress contemplation sitting”