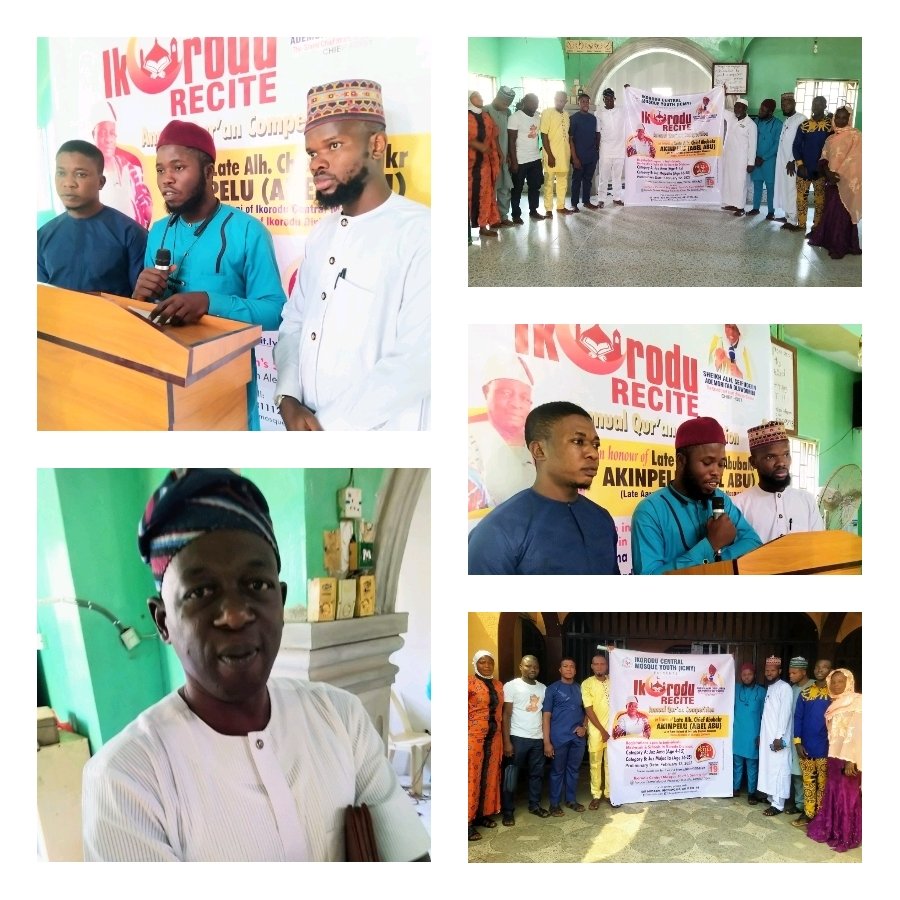 “Gone are the days in Ikorodu division, where students of various Arabic schools compete in sonorous voices, reciting the Qur’an thereby creating enthusiasm in the young ones to learn how to read the Qur’an. But now, most young ones are distracted and many are neither ready to learn nor memorise the Qur’an”

“Ikorodu Recite project was borne out of the fact that there’s a need to resuscitate the enthusiasm of learning the Qur’an by encouraging young ones who took their time to memorise it, this we believe will encourage others to memorise it”

Above were decent assertions from Amir President (Ikorodu central mosque youth) Abdulwasi Ademola Shodunke, in a bid to foster Muslim unity, setting signal for a first of its kind Ikorodu recite competition amongst young lads across the division

In an official press briefing held at Konitanbe mosque, Abel Abu house on the 22nd of January 2022, Ikorodu Recite project according to organisers, is a drive of Ikorodu Central mosque youth under the auspices of the Grand Chief Imaam of Ikorodu Division, His Eminence, Sheikh Seifudeen Ayinla Ademoritan Olowooribi

Progressing his remarks, Ademola Shodunke states, “It is so sad that the world is in shambles today, and many young people aren’t ready to learn the word of Allah, they’re not found in Arabic schools, many of them drop out of secondary schools, many turn to social vices which increases crime rate in the society”

“The Ikorodu Recite 1.0 shall be held in honor of Late Alh. Chief Abu Bakar Akinpelu (AbelAbu) who was until his death, the Aare Adinni Of Ikorodu Central Mosque as well as Baba Janmah of Ikorodu division, the position which he earned due to his immense contribution to the growth of Islam and dawah in Ikorodu division”

“With Ikorodu Recite, we hope many will remember Allah and turn back to Him.
Furthermore, the Qur’an, being the focal point of Muslims across the globe, this project is aimed at contributing our quota to strengthening the unity of Muslims in Ikorodu division. We’ve invited all schools, madrasah and individuals irrespective of their affiliations across Ikorodu division to participate in the competition”

“Although, it is not enough to memorise it, but to also understand its content and practise it throughout our lifetime. To achieve this we’ve highlighted competent and renowned scholars to enlighten us on the Grand finale day”

“Winners shall be going home with prizes worth ₦250,000 while first and second runner-up will be awarded prizes worth ₦200,000 and ₦150,000 respectively for both categories”

“We appreciate the family of Late Alh. Chief Abu Bakar Akinpelu (AbelAbu) for ratifying us and approving the proposal to host the program, which we’re glad that it’s successful. Part of which is the prizes to be won by the winners of the competition” Ademola Shodunke expanded

Guam Akinpelu popularly known as Konitombe (son of chief Abu Bakar Akinpelu) speaking on behalf of the family, lauded the idea, urging promising lads to get involve and stay committed to Islamic growth

“When we attained the concept of this proposal as a quiz competition to honour my late father, I felt its certainly a profound feature to keep his memory active reminiscent of what he strutted for as a leader“

“My dad loved Islam, He lends anything in the circuit of facilitating the true stature Islam, So my family cheered the idea to retain his memory. During his time, he achieved a lot for this theology not only in Ikorodu but Nigeria as a whole”

“The concept is a stepping stone for learners to grow fast, right now it pertains to only Ikorodu division, but as time goes on, it would eventually become a state competition and even to the national level”

“We would have made it a sports competition or what have you, but we look at it from the area of appreciate our wards that regularly attend Islamic classes, and also to recognise Islamic teachers (alphas or lecturers) that assists the intellectual growth of the wards regularly” Guam Abu Bakar asserted