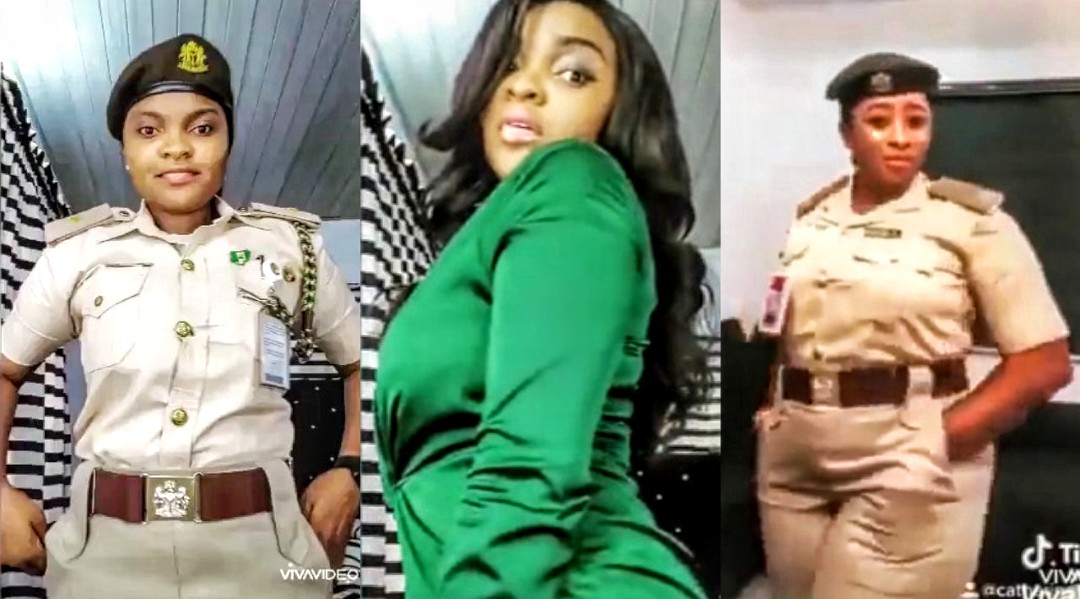 A trio of Nigerian immigration officers are to face disciplinary action after the service concluded that a video they featured in constituted misconduct.

Priscilla Irabor, Catherine Bakura and Blessing Udida were queried last week and asked to report at the service headquarters for flouting personnel guidelines. Five women appeared in the video, but only three were immediately identified and queried in documents posted online.

The women had recorded a video in which they used ‘Bop Daddy’, a recent song by Falz, to change themselves from their immigration uniform to casual outfit which they felt better projected their beauty.

A host of Nigerian women had been using the video to transform from seemingly awkward look to a gorgeous outfit. Some men also made similar videos to relish the trend, which started when Falz released the video early last month.

A similar video uploaded on YouTube showed American service members changing their outfits while a soundtrack “don’t rush” played in the background, but there was no news they faced any disciplinary action.

But the Nigerian immigration women violated public service rules against immoral behaviour, sabotage and any other act unbecoming of a public officer, according to a query dated April 15, 2020.

“To state the obvious, your act has caused a lot of embarrassment to the NIS and in line with our standard as a paramilitary organisation is considered scandalous,” the query from the comptroller-general’s office said, adding that the women violated public service rules 030301 and 030402, which deal with immoral behaviour and sabotage, respectively.

“This is a serious misconduct liable to dismissal from service,” it added.

The query was preceded by a summon that was sent to the women’s respective departments from the comptroller-general’s office, in which they were asked to report at the human resources manager immediately.

Both the query and summon letters were first posted on Twitter Monday afternoon by a user, @Dondekojo, who did not disclose additional details.

It was learnt that the video was first posted on a WhatsApp group of immigration officers three weeks ago, but it did not cause trouble until it was forwarded to the service’s main WhatsApp group where the comptroller-general, Muhammed Babandede, saw it, sources said.

The video did not seem to have gained any traction on mainstream social media platforms like Facebook, Twitter or Instagram. Many social media users said they were unaware of the video until its fallout began trending on social media shortly after @dondekojo’s post.

One of the women was attached to the immigration office in Ikoyi, Lagos, while the other two were based at the headquarters in Abuja, sources said. The sources pleaded anonymity to avoid being punished for making unauthorised disclosures to the media.

Two of the three women declined comments about the video Monday afternoon, but a spokesperson for the immigration confirmed the service had issues with it.

“I am not aware of any letter, but I do know that we are still investigating the matter,” Sunday James, chief immigration spokesperson said.

The development has divided opinion on social media, although a large section insisted the women have not broken any law.

Other than the public service rules that apply generally to most federal agencies, it was unclear whether the immigration has specific rules on personnel conduct on social media.

The Defence Headquarters has a stringent social media guideline for active service members, which had been applied against hundreds of errant personnel of the armed forces. The immigration, although considered a paramilitary group, is not part of the armed forces.

But some commenters said it was inappropriate to throw away beret or use uniform to perform casual video shoot for online audience.