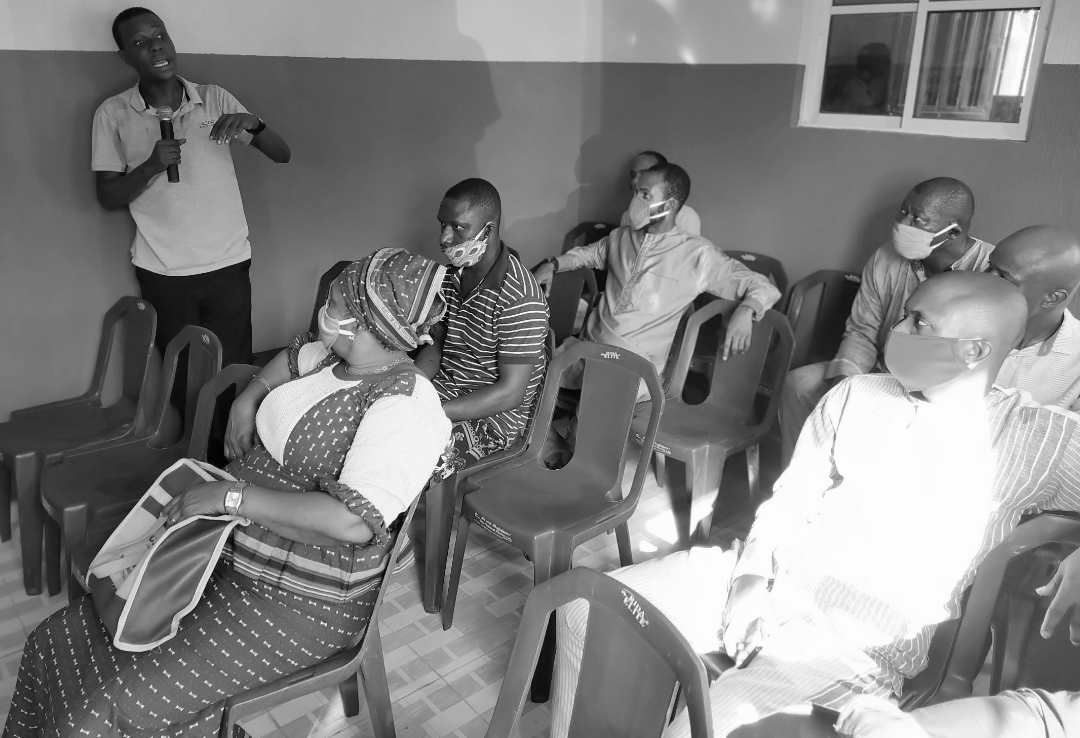 It can be likened to the scene of a typical townhall meeting Initiated by Hon Oluwatosin Onamade on the 12th of May that hosted Stakeholders and personalities across Ijede LCDA to preside over the challenges of accessing Water in this period of CoVid-19 Pandemic in Ijede LCDA and the Solutions as a way forward.

The programme tagged “Our Water Our Right” brought in brilliant minds Representating different Communities across the region for an approximately 3hours Session of deliberation and Positive Contributions to aid the government on ways to effectively Upgrade the Water supply system in the community.

The programme was divided into two educative sessions, the first session Addresses the complaints and challenges from the attendees while the second session opened the floor for an inflow of solution from all in attendance.

Mr Adegbenga Adenote from CDA Banana Estate Igbe in Ijede LCDA started by stating his challenges after relocating from Ijede to Igbe. He complained that 60% of the landlords uses private boreholes while 40% doesn’t have. He stressed the need for boreholes to be installed in his area siting that the few ones in Ijede lacked proper maintenance that is why they are delapidated. He also talked about poor power supply which has added up to the decline of the water state in the community.

Suggested Solution: Mr Adenote urged the local government to ensure that they work on more boreholes installation in his region and see to the provision of adequate power supply in order for the water system to be well managed and durable for Community utility.

“Right now in my area the water we use is not from the government, But we have some publicly installed boreholes. The major issue apart from the inadequate water is the LIGHT. People are even ready to allow others fetch water from their access but when there is no light others would want to preserve the little they have” Peter Okoh Representating Ogbe valley Oke-Eletu Said

Suggested Solution: “If the government can install boreholes that will serve the community from the back of the filling station down to Elemu axis, I believe it will go a long way to reduce burden and help the community to live better, But the CDA also have a role to play in this development, the government cannot do everything by themselves, what about follow up maintenance? The Government doesn’t live in our street, If the CDA can also set up a board to follow up the implementation by the government, it would be a good idea and whatever the challenge is that makes us not to have light should be looked at thoroughly by our government because it is really affecting the water supplies today, the government should work on the light and it would help their efforts in the water supply”, Said Peter.

My first challenge in the issue of inadequate water supplies is the attitudes of our own people, Not just the government now. The Community we live in has also played a huge role in the decay of our water system in Ijede LCDA”, said Adenaike Alagbe. “Even when it comes to the issue of CDA, my own CDA would not be interested in community service that they would not make money from, Like handling transformers and wire running across, you can see that even as people we are not playing our role to help the government in this scenario”. He Continued…..“There was no borehole installed in Ijede LCDA without a generator, where are those generators? And secondly I want to stress the point that whenever the government is installing boreholes for water distribution are they strategically installed in places that it is essentially needed? Because when you survey it most times you would find out that the places for boreholes installations not all though are not where they are suppose to be. There are places like in my street we don’t need the government water because we have already installed our own boreholes, this is what happened at Emmanuel Aguda Cresent. While install boreholes in places that it is not needed. There are areas like the Powerlines where installing boreholes is paramount”, Alagbe Added.

Suggested Solution: “The Last Administration Of Hon Abike Dabiri gave our community a Solar Powered Water supply system, But in less than two weeks the whole battery was stolen! I want to say that our people must wake up to the fact that even though the government has a role to play in this, We also must support them in ensuring adequate maintenance culture is adhere to. And also like I have said before the government should be well guided on measures to installing these boreholes, They must fix it in places that it is absolutely necessary. Even I can recour during the administration of Hon. Hassan at one point they were trying to scheme out strategic areas that would need a water borehole installation and before we knew it Community were insisting they “Fix it here”, “Fix it there”, Everyone was eager just to get a borehole in their own area not considering whether it is really needed or not, it became a matter of bias not necessity. This should not be allowed to reoccur again for sake of progress. And lastly I am suggesting that the local government partner with the water corporation and enlist the services of professional plumbers who will readily be responsible for taking care of this boreholes installation maintenance” Alagbe Added.

Mrs Ishola Sekinat Adetinuke from Itudesan Area Ijede LCDA complaint that there is no installed borehole in her area, “We have a stream (Odo Odoro) where everyone goes to fetch water, even the mosque where people go to pray they don’t have any means of water they also go to the stream (Odo Odoro). There is only one installed borehole in our community that is still working, which was made possible by Hon Alliasau Mattiis which is very far from where we are staying” Said Mrs Adetinuke

Suggested Solution: “We don’t fall into the categories of giving too many advice to the government because we don’t even have water to begin with. We want the government to help us install borehole for our community to be able to access good water and that is all I have to say for now” Mrs Adetinuke added.

Mr. Oluwafemi Onamade From Elemu Ijede LCDA Emphasized the fact that there are few delapidated boreholes in his area and this is as a result of poor management. “If not that we now intend to privately install our own boreholes what would it be like?, There are people who cannot afford to install it and for years now have been going out to fetch water steadily, can’t there be a change to this? This has now made the local government kept quiet about the need to ensure this boreholes are either fixed, installed or maintained”, He added.

Suggested Solution: “The Government can adopt a system called networking where three streets can manage one borehole. All they need to do is find a central spot for the borehole to be installed and then pipe it across to the streets and fix a point in each axis where the water can be accessed by the people living in a particular street, This method am telling you right now is done in Dawson Estate here in Ijede LCDA and it is working beautifully well for them over there. I believe if the government can try this method, it would help them in putting a positive solution to this shortcomings we have in our community today”, Said Mr. Oluwafemi

Mrs Falomomi Toyin from Oko-Ope, Oke-Eletu, Ijede LCDA expressed her sadness with the state of things in her area and declined to even contribute to ways of upgrading the system. She stated that the local government has failed in carrying out their duties and should look at the inner streets within the communities and asked themselves if truly they have done a good job!.

Mr. Dayo Adebanjo from Igbodu/ power line, Ijede LCDA stressed the need for the government to also come to their aid because the powerline Community need borehole installations to help the inhabitants of the area. “We know that the government cannot cater to all and it’s not an easy task considering the huge responsibilities been faced by the local government on a daily basis. But this is a basic challenge and must be catered for in order to give the people better life” Mr Dayo added.

“I am a product of Lagos State Water Corporation for almost 35years, I formally lived at Surulere before relocating to Ikorodu, And I can confidently say that back then we had functioning water not epileptic water. I was really surprised on getting to Ikorodu I discovered that there is no existing synergy between the local government and the water corporation. It is really sad to see that just like my brother had said earlier, Boreholes are installed in places where people don’t even know the value of it” said Mr. Melakin

Suggested Solution: “The local government should try to set up a team of representatives that understand the essence of what we are addressing here today to go out and move around the communities to check and pin point those areas that truly needs water, they need to put a team together who would even be put on a payroll to manage this challenge effectively. It is a statutory function of the local government to provide water for the grassroot Communities and if Ijede LCDA must have a viable economy then this water supplies must be made in essential locations like the schools, Mosques and church areas. I would also suggests the use of solar powered water supplies that will be carefully monitored by the CDA’s in the community” Com. Melakin Added.

With the other participants given the same lines of complaints and contributions, the discourse was brought to a dialogue end. Hon Oluwatosin Onamade later commended the plights and contributions of everyone that participated in the discourse with promise to ensure that the local government would receive their complaints assuring them to get a positive feedback as well, He also urged the participants to always stay vibrant and active in speaking out like they did as an avenue to launch their community challenges.

“A public discourse of this nature is a step in the right direction which will enable us to listen to the voice of our people and know the steps to take in order to bring proper solution to the problem facing Ijede LCDA today. Possibly we shall be having another one but to table other issues” Hon Oluwatosin Onamade stated.