One Year Of The Sanwo-Olu Administration: A Review Of The Lagos First Lady’s Contributions ~ INN Nigeria 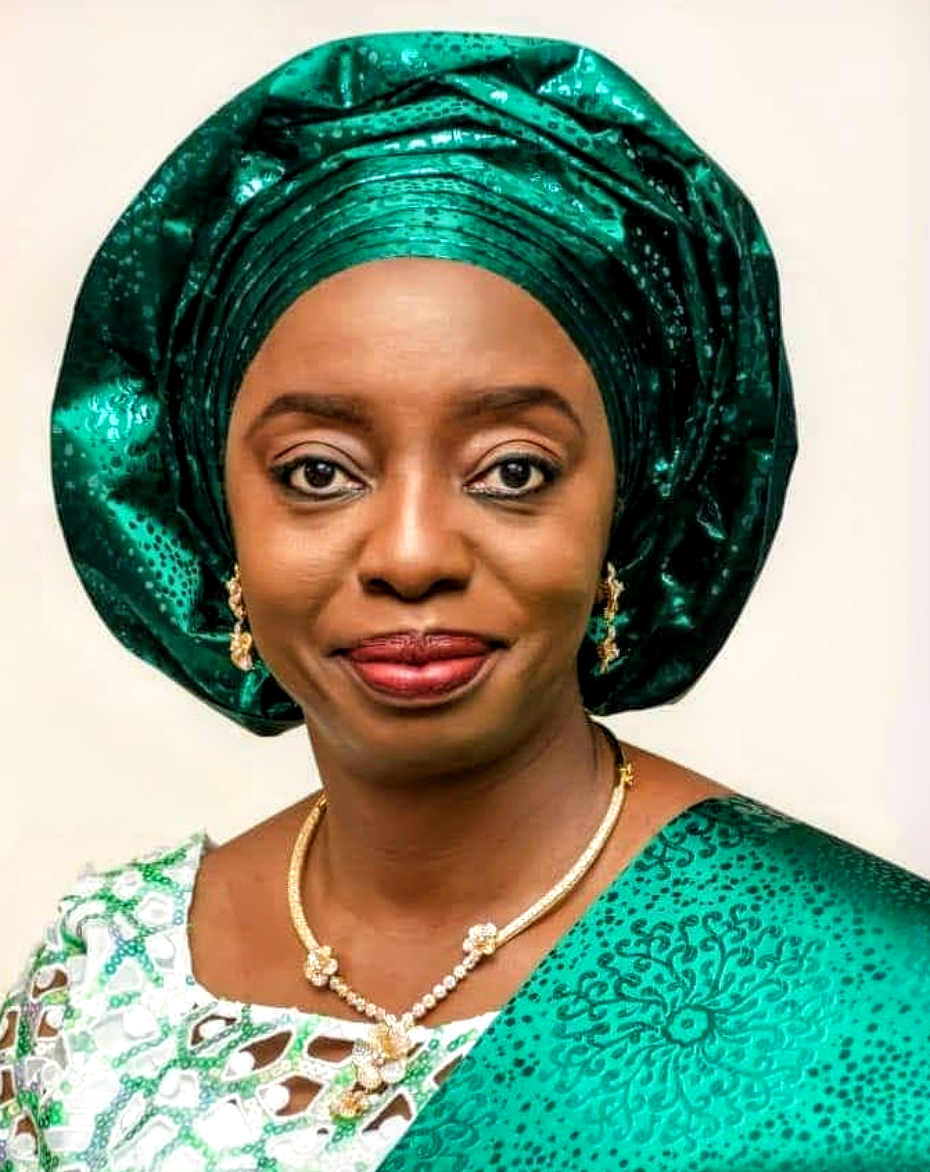 “There is no jewel in the world so valuable as a chaste and a virtuous woman” – Miguel del Cervantes.

This quote by Cervantes, widely regarded as the greatest Spanish writer and one of the world’s pre-eminent novelists, fit the invaluable contributions of Lagos State First Lady, Dr (Mrs) Claudiana Ibijoke Sanwo-Olu behind the scenes in the last 12 months.
Come May 29th 2020, it will be exactly one year that her husband, Mr Babajide Olusola Sanwo-Olu took the top driver’s seat in the journey to birth a greater Lagos State.

Back in 2019, Governor Sanwo-Olu had pledged to work assiduously to address the myriad of issues confronting Lagos State. The record of his impressive and stellar performance in critical sectors is there for all to see.

In her capacity as First Lady of Lagos State and Chairman of the Committee of Wives of Lagos State Officials (COWLSO), Dr Ibijoke Sanwo-Olu has been massively supporting the efforts of the State Government to make life comfortable for the teeming populace. These efforts cover health interventions, protecting the rights of women and girls, supporting the needy, among others.

Upon assuming COWLSO Chairmanship, Dr Mrs Sanwo-Olu introduced a novel initiative of recognizing and appreciating the contributions of elders to the body’s past successes and achievements.
Tagged ‘Senior Citizens’ Visit’, The initiative was basically to visit and identify with senior citizens in their current situations.

The office of the First Lady had also been deeply involved in advocacy against all forms of sexual abuse and domestic violence against women and children. For the First Lady, such acts must be routed out from the State. This she demonstrated on several occasions by personally leading advocacy walks against the scourge.

A thoroughbred medical practitioner, Dr Sanwo-Olu had served meritoriously for 25 years rising to become Chief Medical Director within the Lagos State government health sector. Her impressive wealth of experience had been useful in support of the present administration’s development agenda.
With the acronym : T.H.E.M.E.S, the agenda encapsulates the vision of Traffic Management and Transportation; Health and Environment; Education and Technology; Making Lagos a 21st Century Economy; Entertainment and Tourism; as well as Security and Governance.

The First Lady actively supported the agenda’s second pillar of Health and Environment. She also promoted the Lagos State Healthy Bee Project, a free health initiative in July2019. This was carried out by the State Government in partnership with the Babajide Olusola Sanwo-Olu/Kadri Obafemi Hamzat (BOSKOH) Health Care Mission International, an offspring of Sanwo Cares and Independent Campaign Group (ICG).

Designed to positively impact a critical mass of Lagos’ population through specialized medical services, it achieved remarkable success in bringing healthcare to the less privileged.
It significantly contributed to the Sanwo-Olu administration’s bid to revamp, rejuvenate and reposition healthcare delivery in the State.
Procedures including Pediatric Surgery, Pediatric Eye Surgery, Dental Surgery, Orthopedic Surgery, and Adult Eye Surgery were carried out at the General Hospitals in Lagos, Badagry, Onikan, Randle, Gbagada, Orile Agege, Ikorodu, Epe and Massey Children’s Hospital.
Screenings were conducted at Primary Healthcare Centers across the State including Ajara, Badagry; Akerele, Surulere; Iga-Iduganran, Lagos Island; Epe in Epe; Ikotun in Alimosho; Onigbogbo in Ikeja; and Ita-Elewa in IKorodu.

Over 21,000 people received free health screening and treatment out of which 3,157 surgeries were carried out as needed.

The First Lady also supported another medical mission carried out by the State Government in partnership with the Benjamin Olowojebutu Foundation to mark the 100 days of the Sanwo-Olu administration. Through that intervention, free surgeries were carried out for 150 residents suffering from Lipomas, Breast Lumps, Hernia and Fibroid, with additional Free Consultation and Free Dental Check at General Hospital, Ijede.

Under the environment, the First Lady was at the vanguard of advocacy for residents, especially women to embrace the Blue Box Programme of the Lagos State Government, among other initiatives to engender clean, healthier, liveable and sustainable environment. The Blue Box Program, which is being implemented by the Lagos State Waste Management Authority (LAWMA), encourages waste sorting, especially from the source of generation.

Prior to the hosting of the 2019 National Women’s Conference of COWLSO, the First Lady and members of COWLSO embarked on a special walk to create awareness for the conference. She unveiled plans to launch an Endowment Fund to defray the cost of pediatric surgeries for needy babies at the Ayinke House of the Lagos State University Teaching Hospital (LASUTH), Ikeja.

Till date, many are still basking in the euphoria of the 2019 COWLSO Conference held from October 22 to 24 with the theme: “Unlearn, Learn and Relearn: 21st Century Women’s THEMES Approach/Perspectives. The conference recorded a massive attendance of over 3,000 participants in three days of mind shifting trainings and brainstorming. It also equipped women with the skills to key into the emerging opportunities in Lagos State.

Participants benefited immensely from the life changing experiences, true life stories and case studies presented by accomplished professionals in various fields.
It was also on record that for the first time, two houses were won during the gala nite’s raffle draw.
Other prizes won included cars, cash rewards, return air tickets, deep freezers, cooking gas, television, washing machines and exquisite bed.
In the 2019 edition of the annual Lagos Women Run, Dr Sanwo-Olu broke Nigeria’s road race record as the first governor’s wife to finish an athletic road race. The First Lady not only flagged off the race as scheduled at the Tafawa Balewa Square, but also ran the whole course of the 10km race to the finish point at Teslim Balogun Stadium, Surulere.

In December, the annual Children’s Party and Christmas Party of the State were also held with remarkable improvement.

In sustaining the annual first baby of the year celebration, the First Lady improved on the year 2020 edition. She visited for the first time, some general hospitals that has not benefited from the initiative since it started 18 years ago. These included General Hospital, Ijede; General Hospital, Agbowa; General Hospital, Ketu Ejinrin and the regular beneficiary, Lagos Island Maternity Hospital. Exciting gifts including mum’s packs, baby essentials, cash rewards and other baby items were presented by to the first babies and their mothers.

As a follow-up to the COWLSO conference, a three-day retreat was organised to equip to equip COWLSO members with requisite skills in Protocol, Etiquette and Security. The retreat, which held at Eko Hotels and Suites, had in attendance Governor Babajide Sanwo-Olu, his Deputy, Dr Kadri Obafemi Hamzat; the wife of former Governor of Lagos State, Dame Abimbola Fashola, among others.

In March, before the State encountered the Covid-19 pandemic, Dr Mrs Sanwo-Olu had commenced Special Sanitation Visitations to Markets in the State. It was COWLSO’s effort to inspire market men and women to maintain a hygienic environment within markets. This will protect and promote the health of citizens who patronised the markets daily.

Speaking at the Tejuosho Ultra Modern Market in Yaba, the First Lady said maintaining high level of hygiene was critical to fighting the virus, among other diseases.

“Coming in to the market this morning, I saw a banner placed at the entrance gate to educate the people about CoronaVirus and I must commend you for that because it is important for the markets to be clean. It is also important for people to imbibe the habit of regular washing of hands with soap and water.

“It is very important that we should all be aware that as long as we are eating clean and healthy vegetables and fruits, we would be able to increase our immunity so that we will be strong to fight the virus.

“As a matter of fact, this time around we need double dose of clean vegetables; double dose of fruits and for the doctors we would recommend Vitamin C to build your immunity and even when you have any of the attack like cough and so on, it would run its course and not stay in your body.

“By the grace of God, we are going to ensure that everybody fortifies their body by eating well, eating clean food and being in clean environment and that is why we are starting with the markets because most people come to the market to buy things and there will also be reward for cleanest market,” she said.

She added that in line with the ongoing campaign to end Tuberculosis, it was equally essential to educate the people that they should use handkerchiefs to cover their mouth when coughing and in case that is not available, the hand or elbow should be used to prevent the spread of the disease, as well as regular medical checkup.

Another critical area which the First Lady has commendably intervened is in reaching out to various segments of the society during and after the lockdown necessitated by Coronavirus. Since Lagos recorded the index case about three months ago, the State and indeed Governor Sanwo-Olu have been commended locally and beyond the shores of the country for the way the pandemic had been handled so far.

At the last count, 27 secondary health facilities across the State, three custodial centres (Prisons) of the Nigerian Correctional Service in Kirikiri, Badagry and Ikoyi, had been visited by representatives of the First Lady to assist with palliatives to cushion the effect of the lockdown. Also, various Non-Governmental Organisations, Orphanages, special schools and homes for children and adults with special needs in all the five administrative divisions of the State were equally visited and assisted with food palliatives, among other essentials to lessen the difficulty experienced by the people considered to be most negatively affected by the lockdown.

Various political groups, interest groups, associations, foundations, among others also benefited from the palliatives, while the Office of the First Lady also collaborated with some food vendors to daily feed hundreds of people in several communities across the State while the lockdown lasted.

Specifically, the relief items included bags of rice, beans, garri, packs of noodles, spaghetti, macaroni, and semovita. Protective equipment, toiletries, sanitizers, disinfectants, cleaning, sanitary and personal hygiene materials were donated to frontline health workers across the State to support ongoing efforts to combat the community transmission of the virus in the State.

Prior to setting out to deliver the items, some religious and professional bodies as well as some corporate organizations had donated some items to the State Government through the Office of the First Lady. The items donated included Sanitary and Personal Hygiene materials, 4,000 bottles of Sanitizers and 500 food packs, bags of rice, beans and cartons of noodles, 60 protective gowns and 100 face shields, among others.

As the office of the First Lady continues with its invaluable contributions to the bid to engender a greater Lagos, the people of the State can only look forward to more interesting times ahead in terms of delivering good governance and making the State work for all.