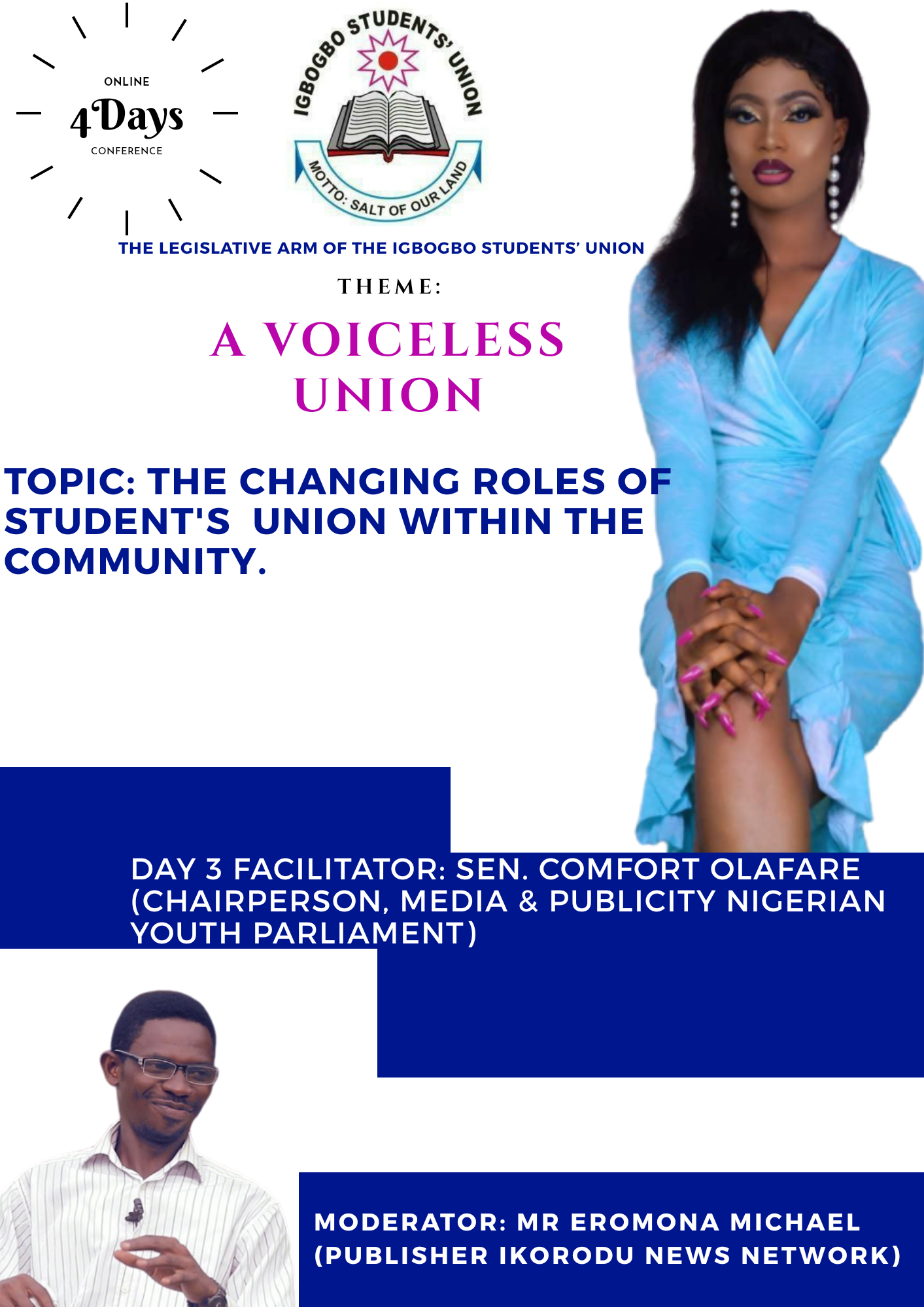 Senator Comfort O. Olafare was born into the family of Esumade branch of Ayangade chieftancy family in IGBOGBO, IKORODU area of LAGOS STATE in the 90s. The first family to produce Erelu Abiye.

She is born and brought up in Igbogbo town in Ikorodu. She had her Primary school Education at Supreme Private School, Igbogbo-Ikorodu Lagos.

Due to her diligence and brilliancy in her primary school days, she was appointed as the Senior Prefect Girl. She later proceeded to Oriwu Model College to continue her secondary school Education where she was appointed Health Prefect in recognition of her her Neatness and orderliness, which served as example to other students.

After obtaining her senior Secondary School Certificate, she was admitted into Abraham Adesanya Polytechnic, Ijebu-Igbo (AAPOLY), Ogun State for her National Diploma where she function in different positions. In 2014, she was elected as the President, Vision Ten, Ogun State Chapter, which she held till 2016; She was also the Vice President Association of Communication Students, (ASCOM AAPOLY) in 2015

Apart from politics and Academic pursuit, COMFORT is also a lover of things of God which made her devote her time to God’s work. While at AAPOLY, she was made the Coordinator of Christian Union Fellowship (Mini Campus), AAPOLY, in 2015.

In line with her commitment, She was appointed the Editor of Egret Magazine( an annual publication of Igbogbo Students Union) in the 2015/2016 administrative year.

In 2017, she served as the Secretary Igbogbo Students’ Union where she as well emerge as an Ambassador in the Lagos State Ambassadorial Team.

While she was still a 200 level student at LASU, she was elected as the First Female President of Igbogbo Students’ Union. I’m recognition of her immense contributions towards youth development and leadership, OLAFARE COMFORT was awarded by Amazing Recognition Award as the “Most Promising Youth for Leadership in Ikorodu.”

Comfort popularly called ADUNNI is a committed youth advocate and a motivational speaker wo have been invited to speak on different topics both within and outside Nigeria.

She started an initiative, Save A Girl Initiative, an NGO with the aim of protecting the right of the girl child. The initiative which she serves as the Executive Director has carried out several community projects.

She is a lover of growth and highly passionate about impacting the world through her prowess.

In 2019, OLAFARE COMFORT proceeded to represent Lagos West Senatorial District at the Nigerian Youth Parliament (NYP) where she was appointed as the Chairman, Media and Publicity Committee.

Interestingly, as an Entrepreneur, she is the CEO of ADUNNI CAKES.

COMFORT has also been appointed as Chairman, Installation Committee, Rotaract Club of Ikorodu Golden due to her leadership trait and Charisma.

She was also elected as the Assistant General Secretary, Rotaract Club of Ikorodu Golden an humanitarian service club which aim is to put smiles on faces of many.

She didn’t stop at that, she also went ahead to contest for the position of Assistant General Secretary, Igbogbo Youth Coalition, a community-based association where she emerged winner.

COMFORT is a goal-getter and a lover of humanity, she was elected as the Director of Projects and Community Services of the Ikorodu Division Youth Initiative Movement.

Currently, she is of Member of the 2020 Electoral Committee for Nation Youth Council of Nigeria (NYCN)Lagos State Chapter, Electoral. Also, she is the General Secretary, National Volunteer Group on Covid-19, Ikorodu Local Government.

She is a pace-setter, path finder, a peace promoter, media consultant and an intellectual enigma whose aim is basically to help make the world a better place to live in.

INN: You’re moving alot and investing yourself on others, what does it takes for the aspiring leaders to have your kind of drive?

Miss Comfort: Focus is important because it helps to remind you of where you are going.

Determination is important because it helps to remain focused amidst challenges and tribulations,

Commitment is important because it renews your focus and determination,

Continuity is expedient because it helps the commitment, focus and determination not to end up being a waste.

Sacrifice is germane because it is solely the price to pay and without this, there’s little or nothing to achieve.

First and foremost what or who are referred to as Student’s Union?

What’s the role of students union?

What role has this got to play in the community?

Student Union is a group of students of a citadel of learning, coming together to form a body with a common goal and interest.

The role of students union is but not limited to the following:

1. To foster unity amongst one another

2. To educate one another

4. To ensure growth and development

In a situation whereby student Union is within a community, what’s her role in the community?

To harmonize students from citadels of learning in order to promote one another, ensure a smooth running relationship and add value to the community through her Students.

Going fully into what the changing roles of Student Union within the community;

The role of student Union is to

1. Bring together students residing within the community.

The issue of indigenous student or not shouldn’t be a criteria to being a member of the student union body instead residency should be considered paramount.

It is important to bring the students together in other to help groom one another, build a mutual relationship if there’s no existing one, network within the union fold and beyond for a sustainability that would leave an imprint in the community and as well and the growth of the community.

2. The role of students union in the community is also to encourage other students to see the need to consider education pertinent because education pays the best interest.

3. The changing roles of students Union is to build NETWORK
It is unarguably that Your network is your network so this further explains that your network determines your worth

4. Another changing role of student Union is to influence.
If as student union body you are not seen as an influencer whose role is paramount to community building then such body shouldn’t be considered as student body because student body is to be seen as influencers.

5. Activism/engagement: While we ensure being apolitical as a result of a neutral body clearly stated in the constitution, it is as well important to note that the executive council of a community is as well responsible for the student body of that community hence, the need for the Union body to consider support from the executive council expedient.

Activism is one of the numerous reasons that makes unionism outstanding but does it truly exist still?

Student Union is a grooming ground where you get to identify your strength more, get involved in community development, and get to network beyond the four walls of your community but the question is are we ready to pay the price for the changing roles of students union in the community?

The prices are priceless and cumbersome because in as much it is the best platform for one’s identity to be identified through visible and feasible programs, engagement and projects, it is also important to note that as much as it can make you and I, it can also mar us but if in all we stand for what is truth and just, it will rather make us.

Q1: Students Ought To Be Front Liners, Path Finders & All But Often Times, We’re Been Tossed Aside, In One Simple Sentence, Please i need to Procure Solutions

Miss Comfort: One thing we must first get right is the fact that:

”NOTHING IS PROMISED, EVERYTHING IS EARNED”

To obtain our rightful spot and earn deserve respect ball down to what we consider valuable to us.

The questions to ask are;
1. What do we project?

3. Where do we channel our strengths?

4. How do we present ourselves?

If the above and many more are not answerable then our deserved respect might not be earned even when we all know we’re entitled to it.

Let me give a brief of 2018 Administration:

The administration placed her value more on education, fostering relationship, networking and engagement.

Unknown to the administration, eyes were on them and as a result of this, respect was earned directly or indirectly.

You may recall that it was as a result of this that a senatorial(Youth) slot came in to our dear community same as recognition from the traditional rulers, stakeholders and leaders within and outside Ikorodu division.

So to earn deserved respect ball down to the way you are dressed, you’ll be addressed.

And above all Active participation is also a major factor.