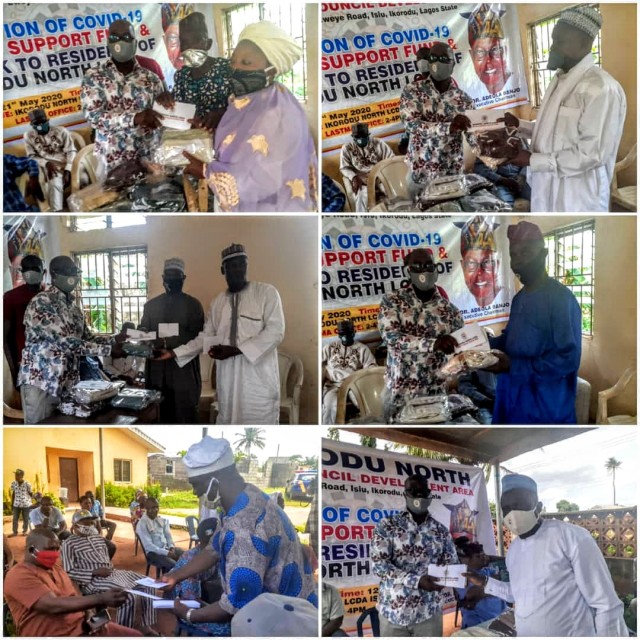 21st of May, 2020 was a very busy day for the Executive Chairman, Ikorodu North LCDA, Bldr ‘Deola Banjo, his executives and legislative arm as the LCDA held an “all inclusive empowerment programme” which is aimed at putting smiles on the people’s face during this trying times.

Despite having done a number of efforts aimed at mitigating the excruciating effects of COVID’19 weeks ago, the Executive Chairman has once again demonstrated his love for his people and again reiterated his commitment to all stakeholders in the LCDA.

To avoid an overcrowded event, stakeholders in Ikorodu North were divided into three categories and at different locations. The day started at the Council secretariat where residents of Isiu, Olohunda and Erikorodo got financial support and face mask.

Then the train moved on to LASTMA office where we met with the good people of Agbala, Odogunyan, artisans, league of Imams, CAN, Non indigenes and CDC and Market men and women to mention a few.

As if that what not enough, the next stop was the party secretariat at Odogunyan where the Chairman met with executives of the party to discuss and resolve some burning party issues that are hitherto disturbing the peace of the party.

The Chairman in his speech promised the people that such gathering would not be the last of it’s kind especially under his administration has he would come with other ways to interactive with residents from time to time.

Residents were full of praise of the Chairman saying “this has never happened before in history”.