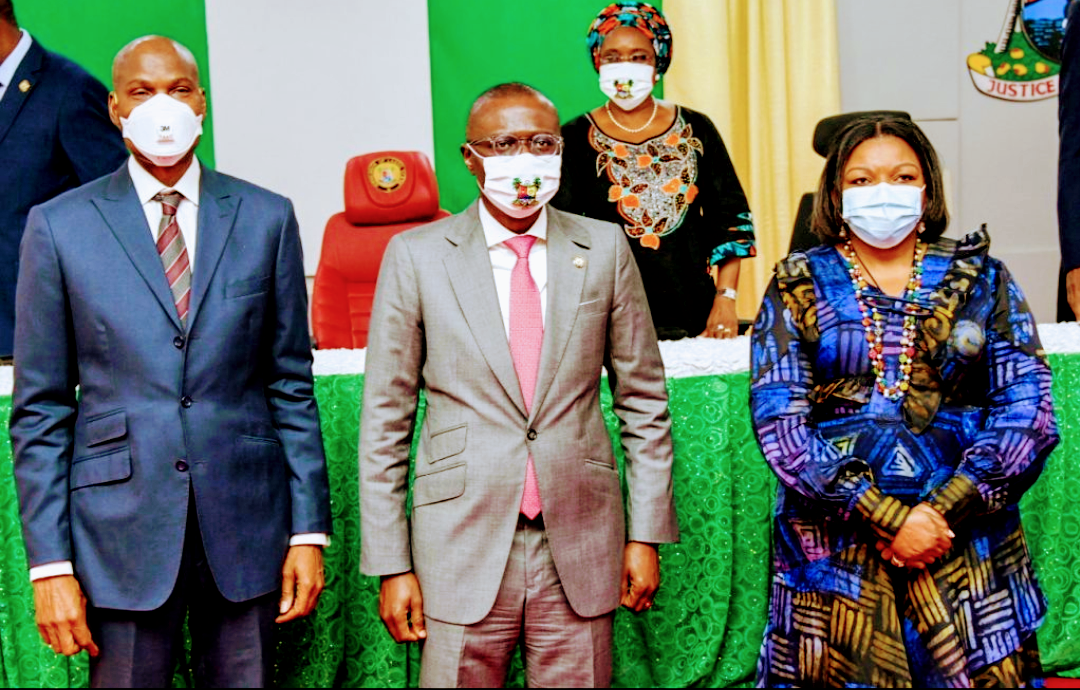 Security and youth entrepreneurship – the twin flagship programmes at the centre of the development agenda of the Babajide Sanwo-Olu administration, were, on Tuesday, re-energised with the constitution of new board members for the Lagos State Security Trust Fund (LSSTF) and Lagos State Employment Trust Fund (LSETF).

Board members of the two agencies were sworn-in held at a brief inauguration ceremony held at the State House in Alausa.

Governor Sanwo-Olu said the new boards would be supported to efficiently steer the affairs of the agencies and help the Government to change the State’s narrative in improving business and security.

Since the creation of the two agencies, the Governor said Lagos had strengthened its capacity to provide security across the the State, thereby witnessing improved business activities as a results of the improvement in the operational capacities of security agencies.

Sanwo-Olu said his administration would deploy instruments of law and resources to sustain the template by investing more in programmes specifically targeted at security, job creation and youth unemployment.

He said: “The Lagos State Security Trust Fund (LSSTF) and the Lagos State Employment Trust Fund (LSETF) were created at different times to address the two key challenges of insecurity and unemployment. The responsibilities of these two important bodies are inter-connected and mutually reinforcing. Their mandates are critical to ‘Making Lagos a 21st Century Economy’ as outlined in the pillars of the T.H.E.M.E.S agenda.

“Today, Lagos has become safer and more secure because of the improved operational capacities of our security agencies. Individuals and corporate organisations have made this possible largely through the financial and material donations to the Lagos State Security Trust Fund. The effectiveness of these initiatives as a strategy to fight and prevent crime has been widely acknowledged, given its replication by other sub-national governments, and even at the national level.”

Since inception, the Governor said his Government had stuck to the vision that would position Lagos to efficiently deploy cutting-edge thinking and technology to prevent crime and criminality.

Sanwo-Olu reiterated that his administration’s commitment to securing lives and businesses remained non-negotiable, stressing that LSSTF, from the outset, had been run like an arm of government, given the independence of the agency.

The Governor also disclosed that the State Executive Council had scaled up the allocation to the LSETF in the 2020 revised 2020 Budget to make more funds available to the Micro, Small and Medium Enterprises (MSMEs), with the objective to support young people to finance their entrepreneurial skills and create jobs.

He said: “For the LSETF, we want to continue creating jobs and economic opportunities for the present and especially for the future. This means a radical rethinking of existing entrepreneurship, certification and financing models and strategies. We must establish new paradigms that are fit for the 21st century.

“Our young people should be a priority in the design and implementation of the initiatives of both LSSTF and LSETF. The success in delivering on the mandates setting up these bodies will be determined in large part by how well we are able to take the attitudes and mindsets of the youth into consideration.”

surpass achievements of their predecessors. He noted that members of the previous boards of the two bodies left enviable records during their stint, urging the new board members to take the agencies to new heights of achievement.

The Governor particularly charged the LSETF to scale up its oversight on loan beneficiaries and help them build capacity to successfully manage their businesses on a trajectory of growth, especially in the period of Coronavirus (COVID-19) pandemic.

The LSETF Board chairperson, Mrs. Bola Adesola, Senior Vice Chairman (Africa), Standard Chartered Bank, who spoke on behalf of members, said the agency would work with partners to double its impacts on MSMEs.

Giving acceptance remark on behalf of members, LSSTF chairman, Mr. Kehinde Durosinmi-Etti, a former Bank Chief Executive Officer, said the organisation would keep its focus on designing programmes that would boost protection businesses and improve security across the State.