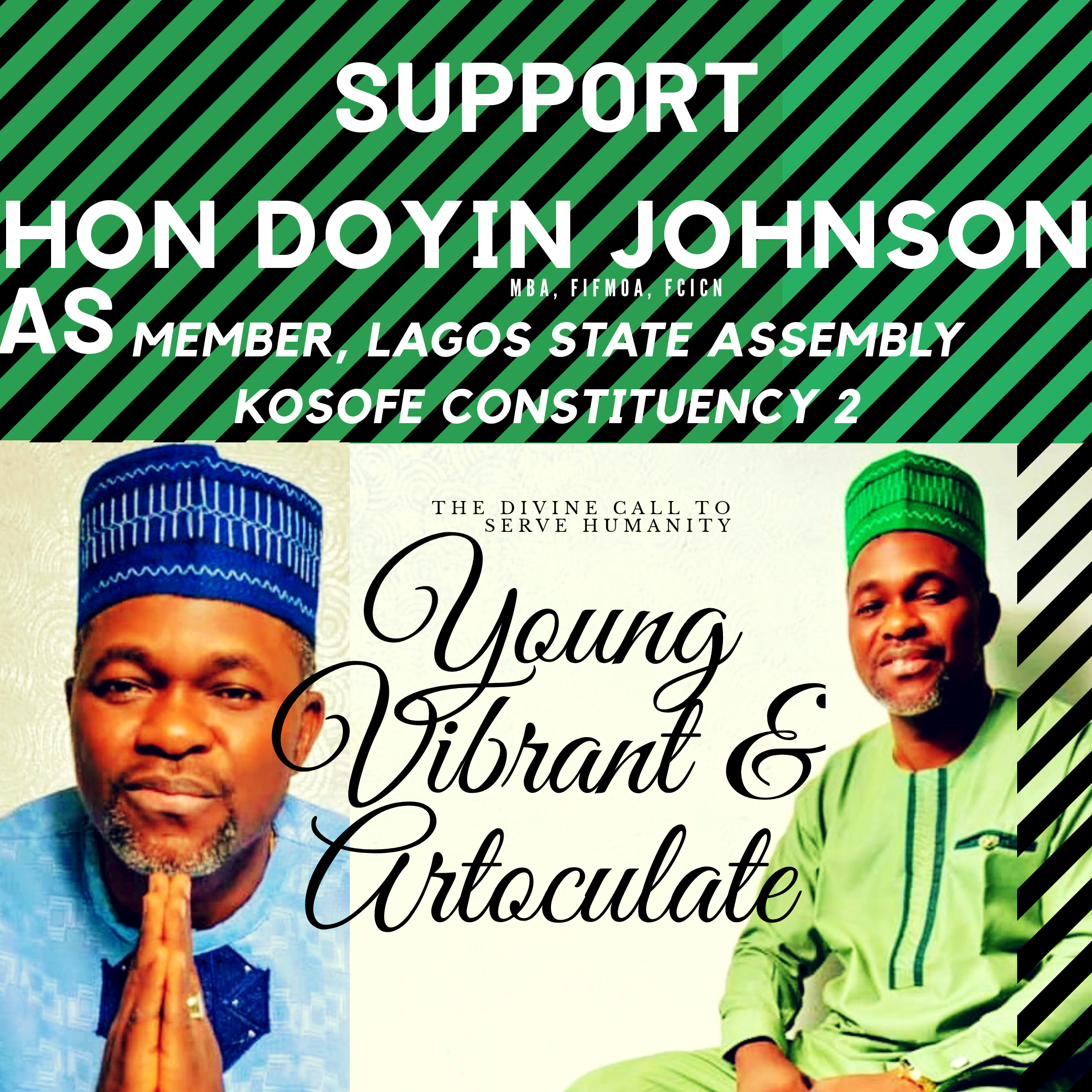 He holds an MBA in Marketing Management and a Post Graduate Diploma, PGD in Management Studies from the Ladoke Akintola University of Technology Ogbomoso.

Doyin is a Fellow of the Chartered Institute of Commerce of Nigeria, Fellow, Institute of Facilities Management & Office Administration.

Doyin is the Director General/National Coordinator of Asiwaju Frontliners (Bola Ahmed Tinubu foot soldiers, founded in the year 2011). He is also the Convener; Nigeria Agents of Change, the group that organized and mobilized a Hundred Thousand (100,000) campaign volunteers for the PMB/PYO 2015 Presidential Campaign and Elections), he is also a foundation member of IBORA.

Doyin`s drive in Politics extends beyond the whimps of the south-west as he was elected as the Zonal chairman south west; Coalition of APC Registered/Accredited Support Groups from APC National Secretariat Abuja, he is also the South West Publicity Secretary of Presidential Support Committee.

With a rich and engaging involvement in the development of the Nigerian youth, Doyin organized one of the most attended youth conference in Nigeria dated 5th October 2019 in Lagos Nigeria, The Bola Ahmed Tinubu (BAT) Mentorship Conference.

The conference had in attendance over three thousand (3,000) young people from all over the country and Eighty Two Thousand Four Hundred and Fifty One (82,451) people of all ages viewed the event live online via YouTube, Facebook, Instagram.

It will be worthwhile to also note that Doyin single-headedly funded the event, this is a commendable effort towards the much envisaged New Dawn in the Nigerian society.

To rewind a bit, Doyin served as Special Adviser on tenement revenue to the Executive Chairman of Agboyi Ketu LCDA, Kosofe, between the years 2009 to 2011.

He also served as the Secretary in the Strategies and Planning Committee of the ORANMIYAN LAGOS SUPPORT GROUP in the year 2014, the group was a pivotal part of the 2nd Term Election bid of Engineer Rauf Aregbesola as then Governor of Osun State.
The team was led by the revered Dr. Muiz Banire and Chief Dr. Sunny Ajose OON.

Doyin was also a prominent Member of the Sports Directorate of the Babajide Olusola Sanwo-olu Independent Campaign Group (BOS-ICG) and also a Member the Akinwumi Ambode Campaign Organisation (AAMCO 2015).

He has authored 3 Bestselling books: Nigeria and The World, The Best of His Generation, and Fundamentals of Leadership, he has two books waiting to be published.

Doyin is also an accomplished Business man, he is the managing Director of XPrado Groups of Companies.

Doyin shared unbelievable characteristics with his principal, mentor and role model Asiwaju Bola Ahmed Tinubu, he can share his last Kobo with total strangers, his philosophy is deeply rooted in discovering and helping young people firm their foot in life.

Doyin is a bridge builder and a man of the people. He is active, mentally, physically and socially fit.

Finally, he was actively involved in the June 12 struggle against the military juntas that brought democratic system of government back to Nigeria in 1999. He is Happily married and Blessed with children.