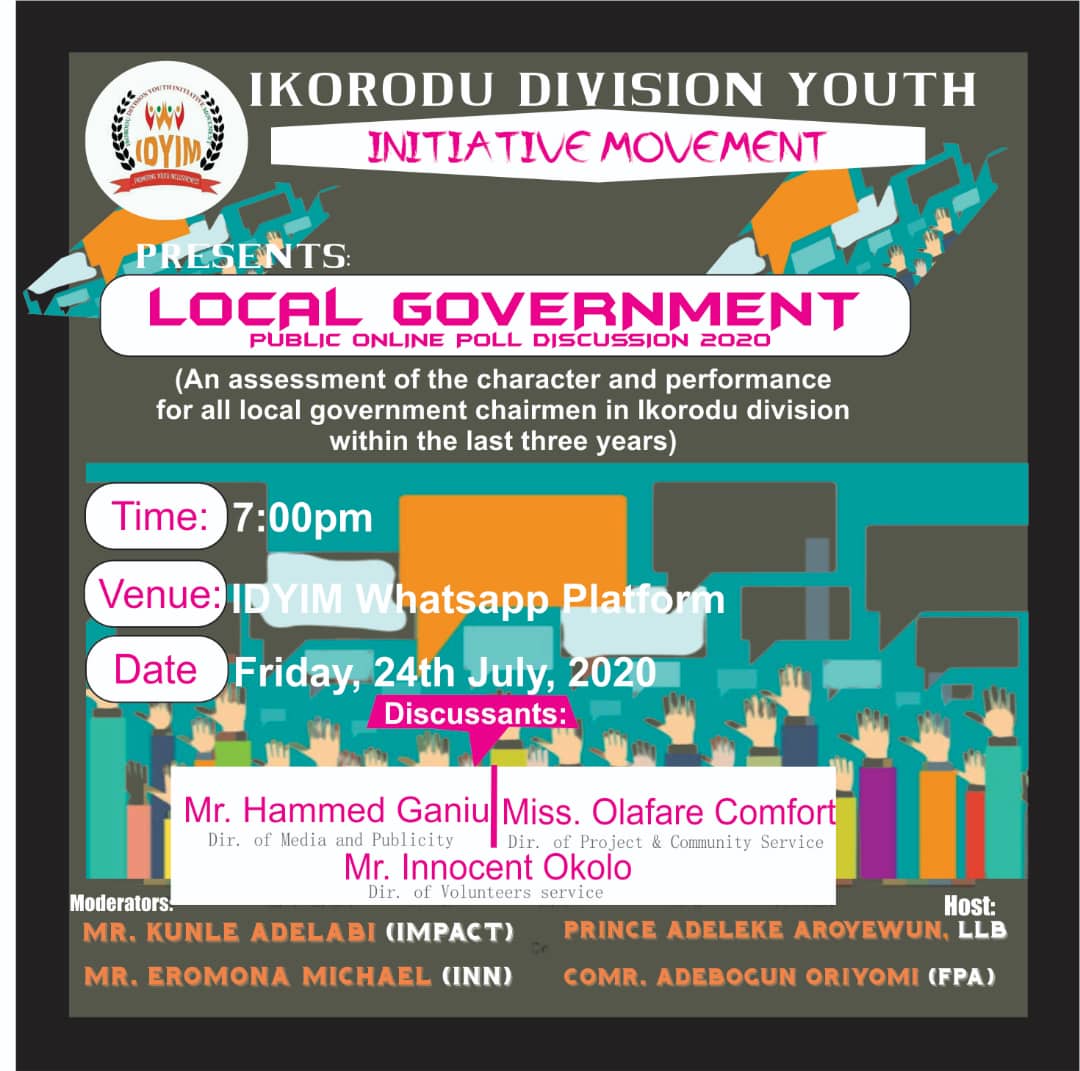 The Discourse was initiated by the executives and board of trustees of Ikorodu Division Youth Initiative.

The session is more of an enlightenment and feedback session from an online & physical poll process that kicked off in the last two weeks accessing the Performances of the 6 LCDA Chairmen Accross Ikorodu Division.

A1: The initiative of Local government accountability performance public pool was to tap the accuracy of the performance of our grassroot.

The Local Government Accountability Performance Public Poll was borne out of the need to hold our representatives responsible of their representation.

The poll is an initiative of IDYIM and it was conducted by IDYIM with some volunteers across the Division not with any LG or LCDA’s Chairmen.
In its simplest form, it is basically to help measure the performance of our chairmen since their emergence because to be accountable is to be answerable.

Q2:Was it coordinated in collaboration with the sitting LCDA Chairmen?

A2: The Chairmen were excluded because of the need to ensure a free and fair accountability performance exercise knowing fully well that he who comes into equity must come with clean hands.
We engaged that form to avoid any form of interference from anyone and and to get people’s real opinions And also to be objective with both the LG, LCDA’s, And the people.

Q3: Using this approach is not a bad idea going into the polling, But do you and your team have any idea about projects or projections of the present Chairmen in order to even evaluate their strength and weakness while conducting this poll?

A3: Thank you for this wonderful question

The exercise was centred on key areas any chairman is expected to channel his strength on towards ensuring a good governance. E.g; Health, Education, Security, Accountability and Stewardship, et al.
And during the assessment exercise, we gave room for each participant to pick their most preferred and make their observation aswell as their opinion known.

Q4: Who were your target audience and what form of survey did you engaged for the exercise?

A4: Our target audience are those affected directly by the government in power.

Does it mean that everyone is not affected?

While we say we’re all affected by the government’s decision or action, it is expedient to note that some are more affected than the other and who are those in question, they are the the motorcyclist, the aged, market-women, traders, youth, etc.

We adopted the closed-ended form

Q5: How many council areas did u covered and residents engaged in each of the councils?

We and 24 volunteers network across Ikorodu division participated in this project.

An estimate of 500 respondents from each LCDA with total of est. 3,000 respondents across the 6 LCDAs– Ikorodu central, Ikorodu north, Ikorodu west, Igbogbo/Bayieku, Imota and Ijede LCDAs.

Q6: Don’t you think that engaging council chairmen could have given you opportunity to assess them base on their budgets and at same time enable you ask question on implementations to know how money appropriated are spent?

A6: There are records, We don’t need bias engagement in the poll to get the structurized result.

Every budget should be able to cut across

And getting the impact of these various intents won’t be gotten from the top but from the people meant to feel it.
We are still coming to that, we decided to start with public to give us insight about what they are going through and facing in their respective LG and LCDA’s.

Doing this will enable to know how and engage and discuss with the Chairmen when ever we are meeting with them.
In asmuch it is considered apposite to hear from the council chairmen on implementation, budget, et al, good work should be able to speak for itself knowing fully well that government is for the people.

Q7: Considering the largeness of Ikorodu Division and nature of the exercise did your team encounter any difficult in carrying out the assignment?

A7: Yes, We encountered few difficulties

—- Ignorance and inadequate sensitisation of know your rep

Q8: But in all what was your feedback and we also learnt you had an online polling too. How did you combine those modalities to create your statistical outcome chart?

A8: In as much people were reluctant at first, with patience and detailed explanation, they got to fill the form where we got series of feedback for both the online and offline exercise.

As for the statistical outcome chart, we got a professional who used his experience alongside the directorate of project, volunteer, et al in helping to get an accurate analysis as gotten from our participants which we shall be making known to the public soon.

Q9: Kindly give us insight into your findings in the area of education. How are the chairmen rated across the division?

A9: On EDUCATION aspect, the responses gathered so far further proved that the chairmen have been fair on education matters that is they’ve not really performed up to expectations.

The public also registered their displeasure at how fair the chairmen are in infrastructure and youth development while they registered how much they felt the chairmen has failed them in terms of security, stating how much lives have been denied right to live due to social menace.

It is believed that when we get our result published, the chairmen will not only see this as a result but will work on areas that needs utmost concern and consideration during their remaining one year in office and beyond.

The exercise has helped to access the chairmen across the Division in which the result shall be provided for the public not later than Friday, 31st July, 2020.

Q10: What do you intend doing with the outcome of the exercise and how do you think that exercise like this could help make councils more productive?

A10: We are to present the result to the public and chairmen, for the chairmen to know people’s mindset, knowing to what extent the masses have benefited from their governance.
Also for the Chairmen to know were they are lacking behind so they can work on it as soon as possible before their time runs out.

Q11. I want to believe that at the end of the day when this report is presented, It should have all the Professional and logical backings to deem your results fit for governmental assimilation that will yield Positive changes and adjustments, And not to be perceived as another political smear campaign in disguise?

A11: We’ve been on this LG and LCDA’s poll now for more than a month, we refused to rush ourselves about it so that we will get the best result from it.
Presently, we are at the stage of collation which we make sure we get best hands for the job to avoid any form of negative reaction from either the public or the chairmen.
Also, we are not doing this to condem or praise anyone, which is one of the reason that makes us to be objective throughout the process.

Thank you for your observation and question sir, the exercise is free, fair and aimed at nothing but giving fair hearing to the public on what extent they have benefited from the chairmen across the division.

Also, we shall be making known all the reactions and how much people aren’t familiar with their chairmen aswell as proffering solution and prayers were necessary.

Our basic goal is to ensure an all inclusive governance across Ikorodu division because governance is inclusive when it effectively serves and engages all people.

The exercise is not in anyway to ridicule or praise the chairmen but to access their work so far.