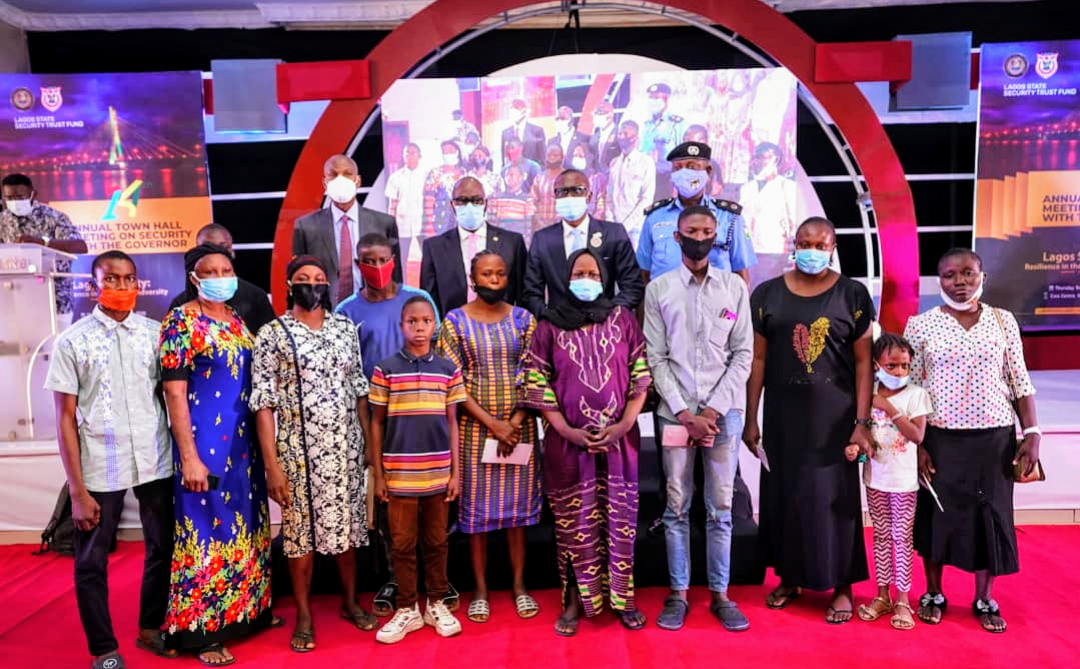 The six police officers lynched in Lagos State in the wake of the violence that trailed the recent nationwide EndSARS protests may not have died in vain.

Governor Babajide Sanwo-Olu compensated their family members with N10 million each on Thursday, fulfilling the State Government’s pledge made during an earlier meeting with police officers at the State police command.

The Governor’s gesture, the beneficiaries said, has not only wiped off their tears, it has also brightened their hope to attain the future their slain breadwinners had envisioned.

As part of the promise to the families, Sanwo-Olu also announced scholarship awards to the children of the deceased officers up to the university level.

The Governor presented cheques to the wives and children of the slain officers at the 14th Town Hall meeting on security held at Civic Centre on Victoria Island. The yearly event with the theme: “Lagos Security: Resilience in the Face Adversity”, was organised by the Lagos State Security Trust Fund (LSSTF).

Sanwo-Olu described the slain officers as “heroes”, saying the deceased sacrificed their lives to secure lives and properties in the State. He said the compensation was the State Government’s modest reward for their gallantry, pointing out that the gesture would help the families to heal from the loss.

He said: “Some of our gallant police officers paid the supreme price for our security and safety during the recent EndSARS protests. These are the officers deployed to protect our families from hoodlums but they were lynched in the violence. Today, I am happy to announce and present N10 million compensation through LSSTF to each family of the officers. All their children have also be placed on scholarship up to university level, courtesy of the State Government.”

The Governor, at the event, received the report of security activities across the State in the last 12 months from Commissioner of Police, Mr. Hakeem Odumosu, expressing his delight at the downward trend observed in sophisticated crimes, such as kidnapping and armed robbery, in the last one year.

As Lagos embarks on rebuild effort, Sanwo-Olu reiterated that security would remain a top priority for his Government. He noted that Lagos was on the verge of bridging technological and logistical gap in its security architecture before the violence that trailed EndSARS protest erupted.

The coordinated arson of the past weeks, the Governor said, has necessitated the need to tighten security across the State, giving assurance that the State Government would invest more in intelligence-led policing and improve operational capacity and welfare of personnel serving in Lagos.

He said: “We must sustain the steady progress Lagos has recorded in security of lives and businesses. The issue of security is a shared mission. The more we are able to engage the citizens, the better we will become at nipping crimes in the bud. Our Government will continue to proactively engage all stakeholders as part of ongoing exercise to address all security concerns.

“We have taken proactive measure of making the necessary budgetary provision for security. We will be committing N37.8 billion to Public Order and Safety in 2021 because we fully understand the correlation between development and security. We will stop at nothing to flush out criminal elements whose sole aim is to foment chaos and perpetrate crimes. Lagos will offer no hiding place for bandits and criminals.”

Sanwo-Olu disclosed that the Government would be committing funds to social protection to address contributing factors to crimes, including substance abuse, unemployment and poor education. He said the State remained focused on addressing issues that led to recent youth agitations, adding that programmes would be rolled out to cultivate young people’s trust and get them to embrace participatory governance.

The Governor thanked the private sector for its support for Lagos security initiative and partnership with the Government through LSSTF.

Odumosu, in his extensive report, said his men rose to the occasion of effectively combating crimes in Lagos because of constant logistics supplies from the State Government.

Despite the trauma the police personnel went through during the EndSARS protests, the police chief said the Command re-mobilised officers to guard troubled communities where police stations were burnt and destroyed.

Giving the breakdown of crimes recorded in Lagos from October 2019 to last September, Odumosu said the Command foiled 273 cases of armed robbery, arresting 1,181 robbers in operations. He said 27 robbers were killed in the encounter during the period.

The police boss said the State recorded a sharp decline in kidnapping in the past year, an effort he linked to improved intelligence-driven operations. He, however, said cases of cultism and drug abuse were on the rise, promising to beam focus to the issues.

Executive Secretary, LSSTF, Dr. AbdulRazaq Balogun, observed that there was a decline in donations to the Funds in the current year, a factor he linked to the outbreak of Coronavirus (COVID-19) pandemic and establishment of similar trust funds agencies by other States.

He said LSSTF had provided 90 patrol vehicles and six units of outboard engine boats for security operations across the State in addition to logistics support provided for the personnel.

He said: “There’s need to acquire more equipment, particularly crowd control assets. Lagos has always set the pace for other States. We deserve to have a security architecture that can withstand any form of adversity.”